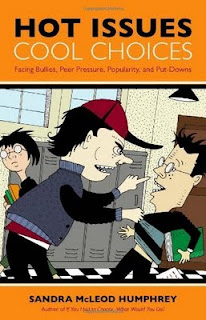 Although my currently published books don’t use a lot of food, the new YA novel I’m working on, Letters From Camp, revolves around a summer camp for kids with behavioral and emotional problems, many of which are food-related.

To get the flavor of Camp Weeping Willow, take a dash of bulimia and anorexia, a dab of hyochondria, a dollop of depression and some spicy anger issues mixed with just a touch of self-mutilative behavior and you’ve got a recipe for a most memorable summer.

The first meal introduces not only a sample menu, but also a glimpse at some of the drama to come. The scene features Megan (our 14-year-old protagonist) and Trisha (one of her cabinmates) at lunch in the mess hall, otherwise known fondly by the campers as the “barfeteria.”

While Leslie tries to avoid looking at the burned hot dogs and gloppy baked beans, Trisha’s busy inhaling everything on her plate. In Megan’s words, “I’m beginning to wonder if this Trisha girl is for real. Anyone who gets that excited over dogs and beans is definitely a few fries short of a Kid’s Meal.”

Which brings us to Jennifer, who’s sitting across the table from Megan and Trisha. Megan tries not to stare at Jennifer’s purple fingernails which are so long they could be classified as lethal weapons. But, like most things you aren’t supposed to stare at, she can’t drag her eyes away from them. As Megan watches, the fingers attached to the purple nails pick up pieces of hot dog bun and stuff them up the sleeves of her sweatshirt. Again, in Megan’s words, “I’m thinking that maybe I should say something to her. Yeah, right. Like, ‘Hey, Jennifer, did you know you just stuck your hot dog bun up your sleeves?’ I don’t think so!”

Megan even views Mrs. Anderson, the camp director, in culinary images: from her ice-creamy voice to her “doughy face with little raisin eyes and lips like my dad’s Polish sausages.”

Although Megan doesn’t have an eating disorder herself, she finds that food can sometimes provide solace in a tumultuous world she has no control over. Watching a pot of soup simmer on an old cast iron stove, she entertains some interesting visuals. “I liked the way the carrots and potatoes snuggled together with the chicken and some green stuff I didn't recognize. Kind of like friends hanging out together.”
Food plays a recurring role throughout the book as Jennifer deals with her anorexia, Trisha and Rachel face their obesity issues, and even Andrea struggles with hypochondriacal concerns about hygiene issues, both as they relate to food in particular and to life in general.

So if you want to spend your summer hanging out with some most-definitely-not-your-run-of-the-mill campers, then come along and join us at Camp Weeping Willow!

Thanks for stopping by and sharing some food for thought, Sandy!


You can find Sandy at:
http://www.kidscandoit.com/
Posted by Shelley Workinger at 8:55 PM