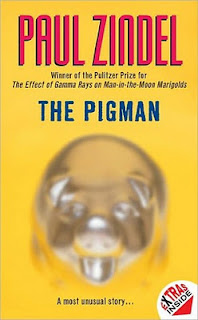 I have to admit that I picked up this book for completely not literary/qualitative reasons:
1. The title, obviously
2. It was yellow, so it called my name on a dreary day
3. The author’s last name started with a Z (I’ve been known to drift toward the X-section because it’s my favorite letter, but it’s slim pickins over there)

Anyway, back to Pigman. It wasn’t until I got home that I saw this book was first published in 1968 (and re-released in 2005). Having not even been born in 1968, I worried about being able to connect with it. I shouldn’t have. Besides the rotary dial phone John and Lorraine make prank calls on that leads them to Angelo Pignati (The Pigman) in the first place, the heart of the story was dateless.

So, it wasn’t the food they talked about that caught my attention (like the school cafeteria’s Swiss steak, which John calls “filet of gorilla’s heart”). Nor was it what they did consume, which was both notable and sad: John drinks beer as often as he can in subconscious emulation of his alcoholic father (“Bore”), while Lorraine has to heat up her own can of soup for dinner while her bitter mother sits at the table and complains about what a burden Lorraine is.

No, they got me with the “Supercolossal Fruit Roll.” (And I just got you with it, too, didn’t I?)

On Wednesdays, the day the cafeteria sells “sick, undernourished apples,” John gets all the kids to buy one, and then, in the middle of class, to launch them on cue because “34 apples rolling up the aisles sound just like a herd of buffalo stampeding.” Yes, I feel like I have to say that kids should be paying attention and not fooling around, but at the same time I have to credit his out-of-the-box thinking. And when John says he gave up that freshman “kid” stuff when he became a sophomore, I have to argue that he hasn’t changed all that much; he and Lorraine give Mr. Pignati a “purpose” much in the same way he did for those reject apples.
Posted by Shelley Workinger at 8:21 PM