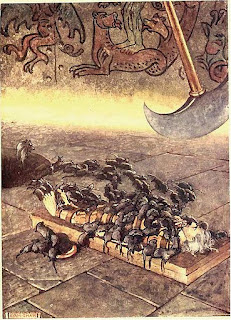 Spicy Food in The Pit…

No, not the pit of your stomach, The Pit and the Pendulum, Edgar Allan Poe’s brilliant short story.  In it, an unnamed victim of the Spanish Inquisition is held in a dungeon pit.  He’s been tortured prior to his imprisonment and at first is fed bread and water.  There’s nothing exciting about the bread, but the second serving of water is drugged and that furthers the plot, allowing the poor man to wake up strapped down with the sharp-bladed pendulum swinging menacingly above him.

The next dish, though, is interesting.  It’s oily and heavily spiced.  The tormentors give him this dish (just the kind of food I make for lunch) to torture him.  They’ve provided nothing for him to drink.  He suffers through this for hours or even days as the pendulum swings down.   The second purpose of his tormentors comes to light then.  The food attracts rats to make his imprisonment and impending death even more horrible.  Read on for Poe’s brilliant mastery of language:

For many hours the immediate vicinity of the low framework upon which I lay, had been literally swarming with rats. They were wild, bold, ravenous; their red eyes glaring upon me as if they waited but for motionlessness on my part to make me their prey. "To what food," I thought, "have they been accustomed in the well?"

They had devoured, in spite of all my efforts to prevent them, all but a small remnant of the contents of the dish. I had fallen into an habitual see-saw, or wave of the hand about the platter: and, at length, the unconscious uniformity of the movement deprived it of effect. In their voracity the vermin frequently fastened their sharp fangs in my fingers. With the particles of the oily and spicy viand which now remained, I thoroughly rubbed the bandage wherever I could reach it; then, raising my hand from the floor, I lay breathlessly still.

Interestingly, Poe choses the word viand here.  The word usually connotes something that is tasty and good.  Ultimately, the real evil of his torturers is revealed in that word.  They’ve used something good to create a terrible thirst and attract terrible rats.  The food, which has served two torture-driven purposes, now serves Poe’s.  The man, recognizing the horrible and aggressive appetites of the rats gets the idea that they can help him escape.  With the remnants of the food, he smears the bindings that hold him in place.  With the pendulum just seconds away from killing him, the rats swarm over him and eat through the straps.  He rolls away, free from the pendulum.

Of course, the narrator’s ultimate salvation comes at the hands of the French army a few moments later, but he was first saved from the pendulum by…food.

Edgar Allan Poe was a brilliant writer who influenced nearly every genre of literature.   Unfortunately, the house in which he began his literary career may not be available to the public any longer.  The Baltimore Poe House and Museum lost its financing from the city due to budget constraints.  Our upcoming anthology, The Spirit of Poe contains work from dozens of authors and poets.  You can support our efforts to save the Baltimore Poe House and Museum by preordering the book at
http://literarylandmarkpress.blogspot.com.

Thanks for stopping by and sharing some food for thought, WJ!

Posted by Shelley Workinger at 7:15 PM