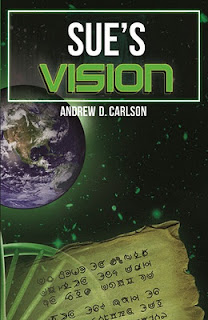 Last time I posted here on BWATE a few weeks ago (http://bit.ly/rQhaWT), I wrote about the individual discovery of food that the clones experienced in Sue’s Fingerprint.  Being new people, transformed from an alien substance with no prior memories or experiences, they each had to discover what foods they liked and didn’t like.  They didn’t have years of experience from their childhood to choose their preferred diet.

Food also plays an important role for the collective group of clones in Sue’s Fingerprint and the soon-to-be-released sequel, Sue’s Vision.  Food is the focal point for receiving messages.

When contained by DHS on the unused military base, meals were the reason to come together, whether it was breakfast at Sue’s house or group dinners in the Base Exchange.  And when the clones got together, they shared information and learned more about themselves and society.  Their individual and collective development as humans was focused around meals.  After the clones were released by Ted Stevens and started living on their own, getting together for meals remained the focal point for living and learning.

But being together for meals also became an antenna for receiving messages that were hidden in the alien substance from which they were cloned.

During one group dinner of Sue’s baked chicken and cheesy garlic potatoes at the base, conversation between the clones and the staff turned to a discussion of the planet.  It was during this conversation that the clones received a message from an alien species—the same species that sent the ‘goo’ to Earth.  It was Sue who decided to act on the message and she escaped the base to deliver it.  She returned to her original home in Kansas to inform her ‘family’ that she and the other clones are the lasting memory of the alien species that went extinct when their planet died.  The ‘goo’ was sent by the aliens to preserve their memory.  It was this message and the clones’ intentions to carry the memory for the extinct species that led Ted to decide to release the clones from containment.

And after being released from the base, the clones continue to be receivers for messages when they come together for meals.  Sitting in Sue’s yard for a summer cook-out during a reunion of clones and friends, the clones learn that they can read and write a new alien language.  Embracing the new message, they decide to act to bring about change.  (You’ll have to wait for the sequel to find out how.)

What are they eating?  The clones are eating new foods to see what they like.  And no matter what they’re eating, when they get together, the clones are receivers for alien messages.

Please buy a copy Sue’s Fingerprint to meet the clones and read all the things that happen when the clones ‘arrive’ on Earth.  And stay tuned for the continuing story, Sue’s Vision!

Thank you, again, Shelley, for the opportunity to post a second guest blog here on But What Are They Eating!  I wish you all the best for your Solid series!  I can’t wait for the threequel, Sound!

Thanks for coming back with more food for thought, Andrew! 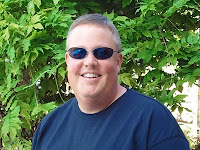 You can find Andrew at:
AndrewCarlson.com
Twitter @Andrew Carlson
Goodreads

And Sue's Fingerprint at:
Amazon
Smashwords

Posted by Shelley Workinger at 7:30 PM