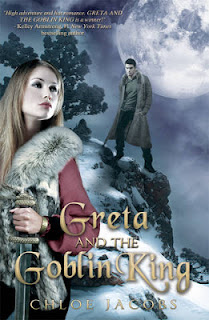 The heroine of Greta and the Goblin King has had to put up with a lot of changes since she ended up in Mylena: land of ice and snow…not the least of which is the slim-to-none access to food.

She realizes pretty quick that when the world has been frozen for hundreds of years, there really isn’t a “growing season”. Food is a really expensive commodity, especially fruits and vegetables


However, there are a few things that will grow in even the harshest of environments, and Greta becomes an expert on finding them and making the most of them. Winter berries and tubers. Even some of the different needles and greenery will add some taste to soups and teas.

Mushrooms are one of the things Greta is almost always able to find, especially after a new frost forces them to fruit. Dandelions will also grow pretty much everywhere—that’s why they call it a weed. Granted, they won’t have the bright yellow tops on them during the winter, but the roots are long and the leaves are hearty. They’ll be bitter but still pretty edible and the roots can be ground up and roasted for coffee, or fried up with some oil and other flavours until they soften up. Fennel and horseradish and other winter-growing root vegetables will also do okay in a place like Mylena.

So while it’s never easy and food definitely isn’t plentiful, the harsh environment Greta lives in isn’t exactly a wasteland. There are hidden gems beneath the surface…much like the hidden gems within Greta herself. She’s tough, but worth a chance!

Thanks for stopping by to share your food for thought, Chloe!

You can find Chloe here:

GRETA AND THE GOBLIN KING
While trying to save her brother from the witch three years ago, Greta was thrown into the fire herself, falling through a portal to a dangerous world where humans are the enemy, and every ogre, goblin, and ghoul has a dark side that comes out with the full moon.

To survive, 17-year-old Greta has hidden her humanity and taken the job of bounty hunter—and she’s good at what she does. So good, she’s caught the attention of Mylena’s young Goblin King, the darkly enticing Isaac, who invades her dreams and undermines her determination to escape.

But Greta’s not the only one looking to get out of Mylena. The full moon is mere days away, and an ancient evil being knows she’s the key to opening the portal. If Greta fails, she and the boys she finds stranded in the woods will die. If she succeeds, no world will be safe from what follows her back . . .
Posted by Shelley Workinger at 5:45 PM