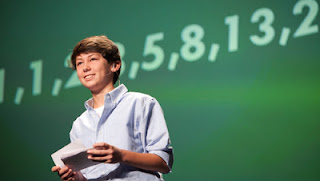 If you’ve read (or seen) The Da Vinci Code, you might know the term “Fibonacci sequence.” If you paid attention, you might also know that it’s a mathematical sequence in which each successive number is equal to the sum of the preceding two (i.e. 1, 2, 3, 5, 8, 13…). And if you delved even deeper, you know that the pattern is often seen in nature, everywhere from the scales of a pineapple to the seeds of a sunflower.

What you probably don’t know is how to use a Fibonacci sequence to develop an improved, portable solar panel that could revolutionize the energy field. Well, that’s precisely what 14-year-old Aidan Dwyer did to qualify as a finalist in the 2012 Discovery Education 3M Young Scientist Challenge. From there he went on to speak at the opening ceremony of the World Future Energy Summit in Abu Dhabi, as well as meet with President Obama in Washington, D.C.

His teachers credit Aidan’s self-motivation, creative thinking, and scientific questioning, while also recognizing that kids have the ability to think outside the box in a way that many adults simply cannot.

If you are (or know) such a bright scientific mind, learn how to enter next year’s competition here:
http://www.youngscientistchallenge.com

Do you know a toast-worthy teen you’d like to see featured here at BWATE?
Comment below with your email address so we can get a post together!
Posted by Shelley Workinger at 2:18 PM