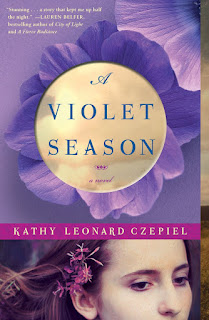 Let’s begin by addressing exactly when violet season is. The work begins with the plowing of fields and moving of cuttings into raised beds in June, but violet “season” officially kicks off with the New York Horse Show in November at Madison Square Garden. (Before you rush out to buy tickets, let me clarify: violet season kicked off at MSG in 1898, but the last violet farm in the Hudson Valley closed in the 1980s and the horse show has moved to Kentucky).

The violet farm depicted by Czepiel is a family business, meaning that the Fletchers are as ensnarled in all the complications that come with both families and businesses as are the roots in their beds. And adding further stress to the situation is the arduousness of the work. Joe Jacobs, the son of the Dutch Reformed Church’s dominie, home from Princeton while he decides whether or not to go on to law school, hires on at the Fletchers’ farm and is quick to note: I never realized how hard you had to work to grow these little flowers. I don’t imagine any boy who gives them to his sweetheart has any idea.

Joe’s intended sweetheart is, of course, Alice, the daughter of the youngest Fletcher brother (why else would an educated young man endure such grueling labor?). And when Joe stays on the farm after Alice is sent away, he’s not so different from the other Fletchers who’re sticking out unhappy situations because of the time, circumstances, and, frankly, lack of other options.

There are bright moments, certainly, like the holiday party where they serve the confection I’d secretly hoped to find since I first saw the title – a cake topped with sugared violets! Now, I’m sure the Fletchers didn’t feel quite the same excitement over seeing yet more of the little purple flowers that they were surrounded by and essentially dependent on, just as I imagine a cherry farmer would prefer to see anything but that tell-tale lattice pie crust on his table each night!

I’d like to think, though, that those crystallized petals brought at least fleeting smiles to the faces of the Fletcher women, not only because there were so few bright spots in their tough lives, but also since the violets –hardy blossoms which flourished in cold climes, not unlike the women themselves – were, even if only for one night, being treated with care and held in a place of honor.
Posted by Shelley Workinger at 7:39 AM