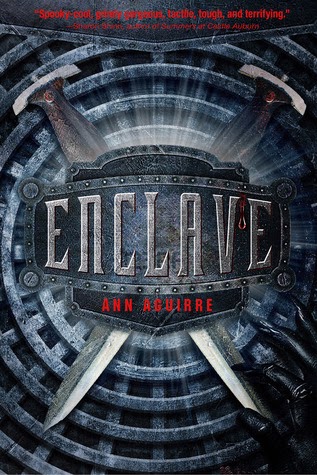 It seems like every other book on the shelves these days tries to hook you with the line: For fans of the Hunger Games. Being a HG fan myself, I have had disappointingly huge success at proving that claim wrong.

Unlike the wannabe novels that take place in malls or high schools or other civilized venues, Enclave’s heroine Deuce is actually struggling to survive in a harsh environment – hers being, well, underground. Because in this arguably bleaker-than-HG future, the surface is no longer habitable and humans are forced to live in the damp darkness below.

The members of Deuce’s “society” have to eat what little they can grow in such conditions (mainly mushrooms) and what meat they can trap, the specifics of which I will leave up to your imagination, not only because it’s not hard to guess what sort of creatures must be scurrying into the traps, but also because the author herself never names those not-so-tender morsels.

And perhaps Aguirre makes such an omission because Deuce herself can’t name the critters, as the names of so many things were lost over the decades that’ve passed since normal surface life ceased to exist.

But names and words and language must have stayed alive through books, you might insist.

Not so much; when the people were driven underground from a great unexplained apocalyptic event, they left most everything behind. There is an archivist of sorts who keeps any book and trinket “artifacts” that the hunters discover while out patrolling the tunnels, but not only are enclave members not allowed to read or study them; “hoarding” any such items in one’s personal space is grounds for banishment.

No daylight, no fresh food, no individuality, no thinking, no hope…not that anyone still alive even knows such a concept anymore.

Ah, except Deuce’s new partner Fade, who grew up somewhere else and survived on his own until hunters brought him down to the enclave. Fade not only opens Deuce’s eyes to unimagined possibilities, but to what’s within her as well. And we all know that hope until needs one tiny seed to grow…


Posted by Shelley Workinger at 12:09 PM