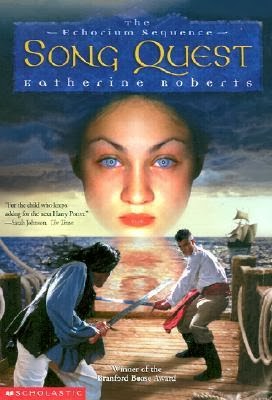 Would you eat a Half Creature?
Guest post by Katherine Roberts

Although I’m not vegetarian myself, I think I would find that last one difficult (I’d find the other two difficult, too – though if I were starving and someone served up the meat in a shrink-wrapped package, maybe I could do it!) On the other hand, mermaids don’t exist so that’s okay.

But I write fantasy! And one of the tricks of writing a realistic imaginary world is to ask this kind of question. So let’s suppose for a moment that mermaids do exist…

In my Echorium trilogy, you’ll meet several types of half creature: merlee (half fish, half human – our mermaids and also mermen), centaurs (half pony, half human),
quetzal (half bird, half human) and naga (half water snake, half human). Most people respect the Half Creature Treaty that forbids exploitation of half creatures. But at the start of the first book Song Quest, unscrupulous hunters are netting the merlee for their eggs and gutting the females to extract this delicacy before casting their bodies back into the sea. Think caviar, mermaid-style.

My imaginary world is policed by human Singers, who live in the Echorium (a bluestone castle on the Isle of Echoes) and use Songs of Power in the place of weapons. Alerted by the merlee’s cries for help, they set out to investigate taking with them two young novices – Rialle, who can communicate with half creatures, and Kherron who cannot. They follow the hunters’ trail high into the mountains of the Karch, where they discover the small green merlee eggs are destined for the young Karchlord Javelly, who is chronically sick… the eggs are supposed to cure him. In the Karch, the Singers discover another violation of the Treaty – quetzal are being kept in cages, waiting to be plucked and boiled for the lord’s table. This looks like a direct violation of the Treaty by the people of the Karch. But things are not quite as they seem. When Lord Javelly’s priests are discovered injecting the merlee eggs before delivering them to their young lord, the Singers must use their Songs of Power not only to protect the half creatures but also to save the life of the young Karchlord.

The half creatures in my Echorium books are based on creatures from our own myths. I gave them limited intelligence along with their animal instincts, and was fascinated by the question of whether they should be treated as low-intelligence humans or highly-intelligent animals. If human, then obviously eating them would be considered cannibalism and wrong. If animal, then maybe it’s more acceptable… provided you’re not vegetarian, of course! The equivalent squirm-factor in our world might be eating a chimpanzee (that scene from Indiana Jones and the Temple of Doom when our hero and heroine are served with a dessert of frozen monkey brains inside the original monkey heads has always freaked me out!)

In the end, I decided the half creatures in my fantasy world should be protected species and are not to be eaten under any circumstance. Do you agree?

The Echorium trilogy was first published by Chicken House/Scholastic. The first title Song Quest won the Branford Boase Award for best debut novel for young readers in 2000, and all three books are now re-available:

Katherine Roberts writes fantasy and legend for young readers. Her latest series is the Pendragon Legacy about King Arthur’s daughter (which also contains a mermaid, although they don’t eat her!)

Thanks for stopping by to share your food for thought, Katherine!
Posted by Shelley Workinger at 7:17 AM