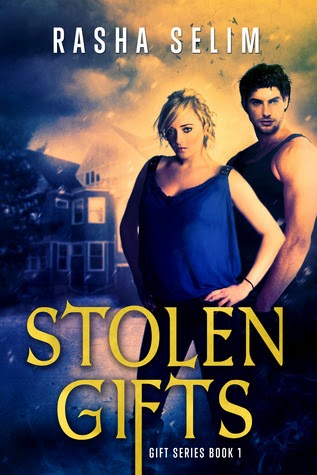 Food.  Such a small word, but holds a lot of meaning.  When I wrote Stolen Gifts, I didn’t start off with food in mind.  It is a paranormal mystery and romance after all.  However, as I plotted, food started to play a role in some scenes giving me a path for character development.

Food played a role in building the characters in the novel.  Writing in a first person POV presents several challenges for an author.  Readers are only in touch with the lead characters thoughts and actions.  They see other characters through the leads eyes, leaving a lot to interpretation.  The trick for the writer is to convey the true characteristics of secondaries through their actions.

Vanessa is the main character, but what novel is complete without a lead male?  In this case it’s Caine.  Since Stolen Gifts is in Van’s POV, I had to find ways to show readers Caine’s personality.  Van’s insecurities show through in how she views Caine, therefore distorting him somewhat.

I used food and touch to let Caine shine through.  For example:

I must have made a sound as Caine turned around.  “Do you need any help?” I asked looking away quickly.
“Nah, I got it under control, and it isn’t much anyway.  Have a seat and make up your tea.  The half and half and sugar are over there,” he said as he pointed to the counter.  Now I knew he remembered, I drink my tea with half and half, not milk.  It was a habit I picked up when I was eleven, visiting the UK with my family.
“It smells good. You made bacon, my favorite.”
He piled on three pancakes and several slices of bacon on a warmed plate from the oven and placed it in front of me.  He then moved the syrup and butter closer to me, then returned to the stove and made a plate for Garrett and placed it in the oven.

Food can also play a sensual role in scenes.  Who hasn’t used food to win someone’s affections in some way?  The way to a man’s heart is through his stomach, is a commonly-said phrase.  But what if the reverse was also true?  What if a man used it to gain…for lack of better word…entry?

Van misses Caine’s small hints, even though he is continuously dropping them.  In this scene things heat up between the two of them:

The boy’s dinners were aroma infused and looked so good that I couldn’t resist taking some bites from Garrett’s Basil Chicken stir-fry.  Enjoying a stolen bite I closed my eyes and was lost in flavor.  I detected a new scent and opened my eyes to see a fork filled with Lime Green Chicken Curry.
Caine held up the fork.  “Do you want to try some of mine?”
“Sure.” I wrapped my mouth around the offered bite, while he watched me, his eyes never leaving mine.
“Is it not too hot for you, Van?” Garrett asked.
The moment was broken.  I looked to Garrett and mouthed a silent thank you. Caine was intoxicating, and if he continued this way I doubted I could restrain myself.  All I wanted to do at that moment was jump across the table into his lap and kiss him.  Garrett’s presence would not have been a deterrent.  But we have work to do and Caine was not interested.

It’s too bad she didn’t see it for what it was.  Caine definitely communicates his desires and demonstrates his personality through these small moments.

Food is part of our everyday lives, but with a twist is also part of relationships.  Dinner with a man or woman can be the lead to a great or horrible relationship.  We spend time talking over our plates, getting to know each other.  Lunch with the girls can be a soul building experience.  And food shared on one fork can be an invitation for so much more.

Thanks for stopping by to share your food for thought, Rasha!

You can find her at:

Whoever said you can’t go home again was right. My name is Van, and my life isn't exactly going the way I'd expected. I moved far from home, away from everyone I know and love to avoid having to reveal my Gift...a Gift so strong it scares me. A Gift so strong I know people would try to use me for their own gain, regardless of how much it may hurt me. A dear friend from my youth is getting married back home, and while I'm thrilled for her, I know what waits for me there--disappointment from my parents, and concern from my brother and friend. But worst of all, I have to face Caine, a man I have loved for as long as I can remember, who just doesn’t feel the same way about me. Somehow, Caine and I find ourselves in the middle of investigating the mysterious disappearances of other Gifted people. When the two of us are abducted, I have to decide if I am willing to use my Gift to save us, even though doing so will reveal my abilities to Caine. Little did I know that using my Gift is exactly what the villain is waiting for…putting both our lives are in jeopardy.

Having a Gift is hard. Keeping the ability to read and manipulate minds a secret from family and friends is torture.

Vanessa (Van) Lyons is terrified of her very powerful Gift of Mind, and has been hiding it from her family since she was a child. Her Gift troubled her so much that she moved away from everything and everyone she knew to avoid the possibility of the truth being discovered. She's stayed away for a long time, making excuses for staying put in her charming little cottage in a small town far enough away to be a comfortable buffer. But an invitation to the wedding of her childhood best friend Kelley brings her back home...and forces her to confront all of her fears and emotions. It also forces her to be face-to-face with the man she has loved since they were young.

Caine Moore is a handsome journalist with a playboy reputation. Seen frequently about town or in the tabloid pages with a different beautiful woman on his arm, he has become a completely different man from the boy Van grew up with. Tension builds between them as he sends Van mixed messages throughout the pre-wedding festivities, confusing her and making her yearn for things she's spent a long time convincing herself she could never have.

Caine has been working on a story, and has seen things he shouldn't see. In his desire to protect Van, he inadvertently pulls her into an intriguing but deadly case that puts her right into the killer's path...

My Gift is a part of me. It lays dormant, wanting to be used and I have deprived myself for so many years. On the rare occasions when my control slips, and I use it, I feel whole. Denying it for so long was splitting my soul into two. I realized that I would have to learn a new kind of control. Instead of complete dismissal, I would have to use it on occasion to keep my mind and soul intact.

As the guard approached the door of our prison, I placed a Suggestion in his mind that he would believe what I told him. I wasn’t changing the way he behaved, just what he was going to perceive at that moment. He opened the door and stood in the archway.

Author Rasha Selim was born in Cairo, Egypt and was raised in both Cairo and Dubai, United Arab Emirates. She moved to the U.S. to attend college and pursue a career as a Forensic Psychologist. She left criminology behind to become the mother of three wonderfully active boys. Rasha has spent her life engaged with books and as stories of her own began to develop she knew that she had to get them down in print. She is extremely excited to be sharing her stories with the world. Rasha lives in upstate New York where she is blessed to be surrounded by her loving and supportive husband, children, great friends and incredible books.

Posted by Shelley Workinger at 8:52 PM