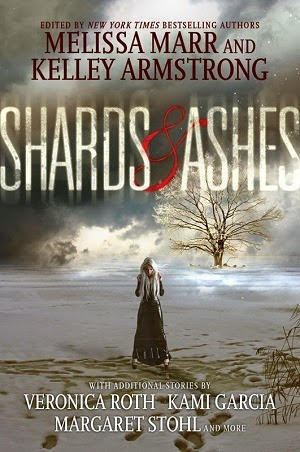 Asking me as a writer to choose one short story from an anthology to blog about it almost as difficult as asking me as a parent to name my favorite child! So let me begin by saying that since this collection brings together the work of pretty much every big writer in YA today, every piece is terrific.

That being said, I chose to focus on Corpse Eaters by Melissa Marr, not so much for the obvious reasons (her name headlining the cover plus the “eat” right there in the title), but because I haven’t yet read her Wicked Lovely series.*

Now, since the stories from authors whose books I’ve read previously – Margaret Stohl, Veronica Roth, Kelley Armstrong  – were written in their recognizable styles, I do feel like I have a good idea now of how Marr writes as well. And it’s gruesome. Or might I say gruesomely good. Because the detail is so fine that it will both put you right into the middle of the scene, as well as reclaim your senses hours later.

Here, let me show you:
In Eaters, there’s a vat for storing bodies that “[looks] remarkably like a cross between an aquarium and one of the coffee dispensers at every church dinner [Harmony] remembered.” Can you see it? Horrific, right? But that’s not what I found to be the most disturb/gusting thing in the story.

No, I awarded that honor when I read how Harmony and Chris came to be partners in the war against the Nidos (devotees of the new god on Earth, Nidhogg), and I got a glimpse into Chris’s back-story:
The fourth [bottle] had a good inch of liquid – hopefully gin – in it. Unfortunately, it also had a cigarette butt floating in it. He paused, shrugged, and lifted the bottle to his lips.

Blech! That moment is so clear on so many sensory levels – sight, touch, taste – that there is no doubt that this character was devastated by the loss of his first partner. Yup, if we were playing Meta-Me and the prompt was “rock bottom,” Marr would absolutely be the uncontested winner.

Of course, there are many other facets to the story – action, love, family dysfunction, dystopia – told with equal detail, but none resonated more strongly with me than that foul taste. I mean, even the dead corpses floating in giant serving vessels I could get past – maybe because they were unreal to get to me. But I can too easily feel exactly what an old soggy Marlboro stub sloshing around in a mouthful of gin would feel like. And I. Just. Can’t. Sooo awful…ly well-written. ;)

*I read awhile back that Wicked Lovely had been optioned for film and, whenever that happens, I try to hold off on the book until close to the movie premiere to best compare them. However, in this case, I’m still not seeing production schedule or predicted release date, so I may have to just start reading. ;)
Posted by Shelley Workinger at 10:18 AM