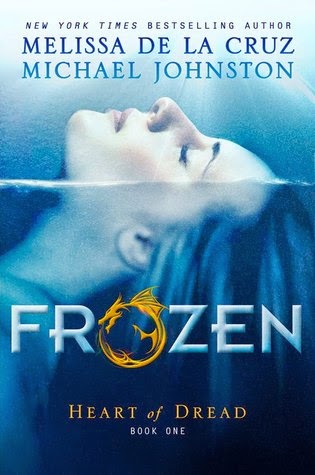 The dystopia created by Cruz and Johnston is pretty much what the title implies – a bleak world of cold and ice, insufferable to all but the heat-elite of the RSA (Remaining States of America). You could even say the second social tier is comprised of hooved quadrupeds – the few remaining cattle who are nurtured in expensive temperature-controlled stables. The cows probably [live] better lives than most people, in fact.

Since clearly very few people are eating beef, the only meat available to the common folk consists of whale, walrus, or reindeer. Those who can’t stomach that are left with processed junk like pizza squeezers and Thanksgiving in a can. Like I said, bleak. And perhaps blech as well. ;) Either or both ways, the availability of food provides a great platform for revealing the inner-workings of the characters.

You see, we first meet Ryan Wesson as he is turning down a steak dinner. Or, more precisely, turning down a job offer he can’t stomach. He actually lets the food be sent back to the kitchen, knowing he’s in turn sending himself and his crew back to the food lines. But even in desperate times, he has an ethical fiber that he can’t shed, despite knowing he’d be warmer (and fuller) without it. Yes, he’s in the mercenary business, but his ex-military moral compass forces him to use his skills for protection and rescue. No, a contract to murder for hire is too much.

Now, in drastic contrast to Wes is the proposer of the next job he DOES accept – a girl who needs help getting out of the country ASAP... and who Wes instantly pegs as a liar and a thief.

Still, he agrees to take her to the “Blue” – a perhaps mythical realm where the sun still shines and the water still flows clear and blue, as does the sky – partially because he needs the money and the work doesn’t harm anyone, but equally because he finds Nat so intriguing.

And when Nat finds out mid-venture that Wes first needs her help to get his ship back – as in, he has a ship, he just doesn’t have it right now – she in turn finds herself falling for this Jack Sparrowish-rogue.

Will they make it to the Blue – if it even exists? And what will they eat when the get there? Good thing it looks like there’ll be another installment to this saga, as my hunger for answers was only partly satisfied. ;)
Posted by Shelley Workinger at 12:25 PM