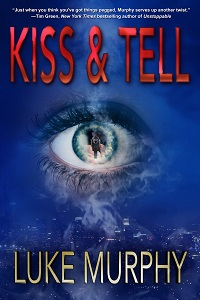 Use Food to “Show, Don’t Tell”

I remember when I first started writing—the moment I decided to get serious about writing, to write with a purpose. When I first decided that I wanted to write with the intention of seeking publication, I bought a couple of books on the craft of writing to help improve my style.

One book I bought was Stein on Writing. The book is written by Sol Stein, who is an author, professional editor, playwright and an expert in communicating craft. One of Stein’s major points in writing fiction is to “show, don’t tell” when trying to get a thought across to the reader. So, with my new novel, KISS & TELL, I wanted to show the kind of character Detective Charlene Taylor is, through her actions and the food she eats.

A little about Detective Taylor:

Charlene Taylor is a single, twenty-seven year old women who isn’t a stereotypical lady or cop. She lives a carefree, singles’ lifestyle, makes her own rules, and will stop at nothing to succeed in a male-dominated career. To put it lightly, she’s the screw-up daughter who defied her cop-dad until one day surprised everyone by following in his footsteps.

She has a broken relationship with her family, drinks heavily and loves sex, but she is also very self-conscious about the food she eats. She is very strict when it comes to her routine of exercising and staying fit, so I needed to find a way to show her single, healthy, on-the-go lifestyle through the food she eats.

In order to do this, I needed to find a food that conveys healthy eating habits, but is also quick and easy to access for a detective who has no punch-clock or quitting hours.

I believe that I showed this on two separate occasions. In the first scene, Charlene has arrived home late at night from a crime scene. She’s hungry and wants something immediately before she opens up a file and starts working on the case again. In the second scene, Charlene has just had sex with her on-again/off-again boyfriend, Andy.

Her favorite post-sex food is SUSHI. She has her favorite “sushi place” set as number ONE on her speed dial, ready for quick and easy access. Sushi is a very healthy food, and one that she can eat while reading over her case files.

Sushi is a Japanese food consisting of cooked rice combined with other ingredients like seafood, vegetables and sometimes tropical fruits. Ingredients and forms of sushi presentation vary widely, but the ingredient which all sushi have in common is rice.

The main ingredients of traditional Japanese sushi, raw fish and rice, are low in fat, high in protein, carbohydrates (the rice only), vitamins, and minerals. Other vegetables wrapped within the sushi also offer various vitamins and minerals. Many of the seafood ingredients also contain omega-3 fatty acids, which have a variety of health benefits.

No, I’m not a sushi eater, but my wife is, and I do recognize its nutritional value and how it works perfectly for my main character’s diet.

Charlene Taylor is a sushi lover…

Thanks for stopping back by to share more food for thought, Luke!

Murphy played six years of professional hockey before retiring in 2006. His sports column, “Overtime” (Pontiac Equity), was nominated for the 2007 Best Sports Page in Quebec, and won the award in 2009. He has also worked as a radio journalist (CHIPFM 101.7).

Kiss & Tell is Murphy’s second novel. He is represented by The Jennifer Lyons Literary Agency. For more information on Luke’s books, visit:


Back text for KISS & TELL:

With the death of her father…

Officer Charlene Taylor has received her dream promotion—working Homicide with the LAPD. Her first case is the high-profile murder of Ken Anderson, a playboy UCLA professor with a haunted past. A mafia kingpin, billionaire tycoon, cheated wife and jaded lover are only a few on a long list of suspects, all with motive and opportunity.

…all hope of reconciliation is lost.

Not only does she feel the pressure from media and her boss to solve her first case, but Charlene must also deal with her father’s murderer, the “Celebrity Slayer,” a serial killer who enjoys baiting her with his knowledge of her life and routines.

Can a rookie detective work two high-profile cases and still keep her sanity?


“Luke Murphy scores big with this deep psychological thriller. Just when you think you've got things pegged, Murphy serves up another twist. Fast paced and fun, you won't want to put this book down.”
-Tim Green, New York Times bestselling author of Unstoppable


“An intricately detailed and clever mystery featuring a tough minded but vulnerable protagonist with more than a few demons of her own. The twists and turns kept me guessing to the very end.”
-Christy Reece, New York Times bestselling author of Nothing To Lose

“Luke Murphy’s novel, Kiss & Tell, has lots of twists and turns, and police procedures where the good guy, in this case, Charlene Taylor, is not always good. The characters come to life with suspense, drama, explosive action, and an ending you never see coming.”
-John Foxjohn, USA Today bestselling author of Killer Nurse

Posted by Shelley Workinger at 10:03 AM