FOODFIC: Please Welcome Kelly Hashway, Author of The Monster Within 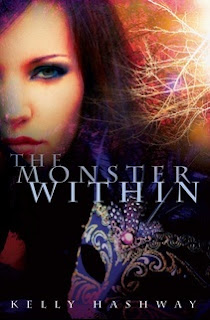 In The Monster Within, Samantha Thompson isn’t your typical seventeen-year-old. She died of cancer and was brought back to life by her loving boyfriend, Ethan. Now they’ve run away together to keep people from finding out what they’ve done. Assuming new identities and living on their own means fending completely for themselves. They live off crackers and bottled water for a while because they don’t have much money. That is until they both get jobs at a local diner. There, Ethan learns to cook while Sam waits tables. But even though they are able to eat good food, they both still have their quirky tastes. Sam dunks French fries in her vanilla milkshakes, and Ethan dunks his soft pretzels in his chocolate milk.
They aren’t the only characters who have odd tastes. Nora comes to the diner every day but never orders anything other than coffee. She drinks cup after cup after cup. And since she and Sam get off to a rocky start, the bitter coffee fits Nora’s personality perfectly.
The other side to this story is that Sam didn’t exactly come back to life as the girl she was before. There was a side effect. She has a monster inside her and she has to feed it in order to survive. And all the monster wants is to drain the life from other human beings, so Sam literally feeds on the life force of others—or she’ll die.
I never realized how much of a role food played in this book, but it’s pretty much everywhere. Throw in some witches and their aversion to salt, and food can pack a real punch in this story.


Thanks for stopping by to share your food for thought, Kelly!

You can find Kelly here:

Books on Amazon
Posted by Shelley Workinger at 10:11 AM