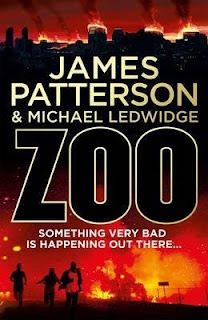 When will we know if the TV version of Zoo is coming back for a 2nd summer?

I so hope it is because they haven’t yet brought my favorite scene from the book to the screen!

You know the one I’m talking about – when people are attacked by wild, savage, ferocious…dolphins.

That’s right, dolphins. No, I’m not kidding, folks. It’s the fact that they are dolphins that makes the attack more frightening than the others. The lion attacks we can of course see coming a mile away, believable even to the extent of the cunningly plotted execution. But Patterson takes us completely by surprise by villainizing dolphins – the golden retrievers of the sea! – by giving them an uncharacteristic hunger for human flesh.

And no, that “hunger” is not the FoodFic tie-in. That distinction goes to the never-before-heard-by-me synonym for puking which was thrown out in a subsequent scene: feeding the seagulls. This caught my attention because my kids and I had just – the same day I read the passage – listed all the colloquialisms we’d ever heard for throwing up. We covered everything from cookies to tossed to porcelain gods hugged to chucks upped, but not one of us came up with seagull feeding. *smh* Just when I thought Patterson had no more tricks up his sleeve. Although that might’ve been Ledwidge’s contribution. ;)

But bodily functions aside, will it be those above-mentioned dolphin attacks that finally force the powers-that-be to take the animal threat seriously? They do acknowledge Jackson Oz and the motley crew of scientists that come together on the show much more quickly than they did in the text, but in both cases will it still be too late? Okay, I know how it ends book-wise, but we'll see if the show takes a different path...
Posted by Shelley Workinger at 10:35 AM