FOODFIC: Please Welcome Richard Rhys Jones, Author of The Sisterhood of the Serpent 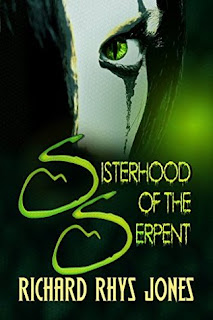 "A food blog", she said. "Write about food."
So here I am, writing about food… Well, actually what the characters in my book, The Sisterhood of the Serpent would eat.

To be fair, it's pretty safe to say that this is new land for me. New land on a scale of the Mayflower Pilgrims crashing into Plymouth Rock, or Neil Armstrong and his "One small step" shenanigans!

Now, it could be said that, The Sisterhood of the Serpent takes place chiefly in a hotel room, and that would not be a lie. However, there are also scenes set on a ranch run by a seriously deviant cult, in a Satanist commune in Colorado, also in a prison, (on Death Row to be precise) and just outside the gates of Hell. So, as you can see, these wide-ranging locations could produce quite a broad variety of eats for us to pontificate on. However, for the sake of keeping your interest I'll just pick a couple, otherwise we'll be here all day.

So I'll start with the cult's ranch, as I don't actually see them dining in any elaborate fashion. The cult members have all promised themselves to Leviathan, the serpent demon. Their lives mean nothing, and they live only to serve their cult, the Sisterhood of the Serpent. The devotees endure brutish scarification and body alterations to resemble the snake devil they follow, with their ultimate goal being to join the ranks of the Nagani, the asp-like beings that wait at the gates of hell. So it's pretty obvious their diet isn't going to be rich in either consistency or taste.

I see them surviving in their first year on a daily ration of turnip gruel, hard unleavened bread, and water. As time goes by and their station rises, perhaps their fare would improve. However, their mortal existence functions only to prepare themselves for the afterlife, so the quality of food wouldn't play such a major roll. Basically, they're living on British school dinners, and they like it that way!

Contrasting mightily with the poor tucker at the Sisterhood's ranch, the hotel room run by the FBI to house the two main protagonists is a different thing entirely. I put them in Bailey's, an imaginary hotel casino complex on the Las Vegas strip, so their every wish would be catered for.

Jim Gregory is a young lawyer from a well to do family. Used to the high life, but not snooty, Jim would be at home eating dainty Vol-au-vents at a polite soiree, or beer and steak with his friends. I see him being a good cook, who knows his wine and is willing to pay for a good Chardonnay for his oysters, rather than a super market brand.

Jim's pregnant wife Rebecca is a different animal altogether. An investigative reporter, she wears the pants in the family and has experienced the gritty ills of the wide, nasty world. She looks after herself, but is willing to rough it if needs be, and has done on many occasions whilst in the throes of her work.

In the book she has reported on bear baiting in India, drug running in Guatemala, Stasi informers being uncovered in Germany, and institutionalized racism in the South African police force. So it's fair to say she's pretty knowledgeable about many cultures and their cuisine.

I see Rebecca being keen on Indian or Latin-American food, curries and spiced meats, peppers and chilis; edibles with a kick that take her back to the adventurous days before she caught pregnant, as she busted scoops and scandals, and made her name on the front line of reporting.

Jim and Rebecca are experiencing a nightly barrage of terror and pain, their very souls are threatened by creatures from the depths of our worst nightmares, but at least they're dining well, right?

Now we come to the Nagani, the dwellers at the gates of Hell who await the coming of Leviathan. They want to claim Rebecca and her unborn baby, and are using horrific dreams that infringe on reality to put their message across.

Officially the Nagani don't eat, being that they're dead and have passed on to a different plane. However, I could probably imagine the chief priestess responsible for harassing our heroes having a nosy in their fridge before actually starting to haunt them. I doubt she wants to eat anything, maybe she does, who knows? But seeing as food plays such a massive roll in our lives, be it turnip gruel or beer and steak, I suppose the interest in it would be slow to wane? I mean, feeding only on the agony she inflicts on the living must be tedious fodder in comparison to a bowl of spicy meatballs, well that's what I reckon.

So perhaps she crosses over from the dream world a little earlier than usual, and casts an eye over the contents of her victim's pantry, before going on to beleaguer and terrify her victims?

The priestess herself is a hag who was probably "recruited" around the time of the First World War, or maybe ever earlier? She'd be mortified by today's manufactured foods, chemical cheese and hormonally-charged meats; though I dare to venture she'd approve of the wide range of fruit and vegetables available nowadays. I see her being a country woman who grew up on raw dairy products, self-butchered meat and fresh, native greens; well, until she was recruited by the Nagani to feed on the suffering of mortals, that is.

So there you have it, a slice of the culinary action (not) contained in my book, The Sisterhood of the Serpent.

I might actually rename it as Jim and Rebecca's Pabulum for Purgatory…
Nah, just joshing, I found the word earlier and I've been aching to use it.

Thanks very much to Shelley for having me on here, and to you for your precious time and attention. If you want to read my work, look me up on Amazon, though my work is waaaay heavier than this BlogSpot… and don't take the one star reviews too seriously ;)

Thanks for stopping by to share your food for thought, Reg! 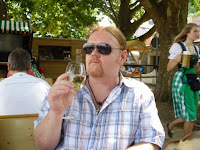 
Books on Amazon
Posted by Shelley Workinger at 12:35 PM