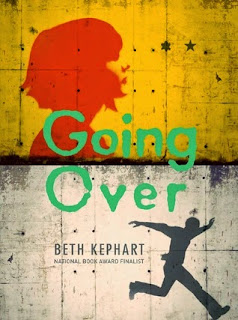 Ada didn’t think up this saying, but she believes it as fiercely as if she did. And the love she wants to do the proving is that of Stefan, the boy she’s loved for the 3 years since she turned 12.

Unfortunately Ada’s story doesn’t take place in 21st century in America, and the hill she wants Stefan to surmount to be with her isn’t some sort of metaphorical social obstacle. Ada and Stefan live in 1983 Germany on opposite sides of the Berlin Wall. He’s East, she’s West, and they’re  separated not only by the imposing cement, but by its accompanying fences, mines, dogs, and twenty-two-centimeter-high asparagus grass as well.

Yes, I had to stop there and look that  up. You’ll be interested – I know I was – to learn that asparagus grass is edible, and it is grass. No, I wasn’t initially sure of either; I thought it might be a name for some sort of weapon or obstacle, like barbed wire. Funny enough, in some of  the images I found it does look a bit like barbed wire, and its shoots are organized – or rather so disorganized – that in Turkish they call asparagus grass “Kuxkonmaz” which translates to “bird can’t land,” so its usage/placement around the wall is perhaps more apropos than the Germans were even aware.

Anyway, yes, Wikipedia may have proven the existence of asparagus grass, but not Stefan’s love.*

On their scheduled permitted visits, Ada sneaks in articles describing the best escape gadgets – double-jointed ladders, invisible string, escapable coffins – but all Stefan wants to do is kiss her and take her hand and go for walks. He wants to savor every precious moment they have together by being together, while Ada wants him to devise a way to make that time endless. He’s today, while she’s always five steps into tomorrow. When you look at it that way – his short-sightedness versus her long – hers seems more like love, his like infatuation. Then again, his feelings might be the more grounded and realistic of the two when considering the concrete obstacles in their path.

Either way, you’ll be pulling for these to beat the odds, cross that wall, and trample that asparagus grass.

*Because love proves itself, remember? I know I digressed a bit, but surely you can’t have forgotten that already!
Posted by Shelley Workinger at 8:30 AM