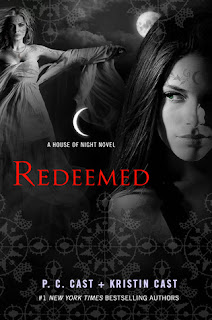 Be forewarned: this post is one giant spoiler. Not of this book, actually, just the 11 that preceded it. ;)

Obviously there have been many changes since this series began, some more predictable than others. Zoey Redbird is no longer just a fledgling; she’s actually a High Priestess now. Or she would be if she wasn’t in jail for killing two men. (Yes, sweet and kind Zoey! But hey, there have been 10 full books since we were introduced; she even says curse words sometimes now!) And since she’s in human jail, she’ll most likely die there when her body rejects the change.

During this incarceration, she’ll surely have visitors, but Heath won’t be one of them as he’s no longer Zoey’s boyfriend. And he’s dead. Well, not all the way dead – he’s sort of been reincarnated, but more in a HoN way than the traditional sense.

On the friendship front, Stevie Rae is still Zoey’s bestie, as is Aphrodite!?! Clearly they’ve both evolved over the course of the series as well – one is now also a High Priestess and the other is no longer even a vampire! You’ve got a 50/50 shot at correctly guessing who’s gone which way. ;)

Besides those original friendships and loveships that readers have been following for 7 years, there have also been cast changes (staff and family, allies and enemies), scene changes (schools and islands and other-worldly realms, oh my!) and conjuring of all sorts of magick – new and old, light and dark.

But one thing has remained constant. (Okay, two things – you know Grandma Redbird wasn’t going anywhere.*) Even in prison, Zoey’s still craving brown pop. It was her beverage of choice when we first met her, and it’s still the first thing she wishes for when served super-runny eggs and beef-jerky-hard bacon in her cell. The only question is: will she be drinking it with her last death-row meal, or using it toast her success at the conclusion of her story?

That’s the one thing I’m not going to spoil, folks. ;)