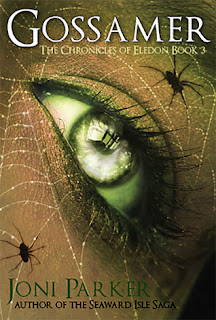 In Gossamer, Lady Alex attempts a daring rescue of her grandmother and her friend who are being held hostage by rebel soldiers and uncovers a plot of betrayal and deception that reaches to the very pinnacle of power in Eledon.

But what are they eating, you ask?  I’ve never had anyone ask before.

Alex is one of those lucky people who can eat almost anything and doesn’t have to worry about her weight.  She’s as comfortable eating at the table of her cousin, Prince Darin, as she is around a campfire.  The menu for her lunch at the Prince’s table includes roasted squab and potatoes, pea soup, tomato salad, bread and butter as well as a piece of cake.  A girl needs her nourishment before embarking on a difficult mission.

Alex also depends upon her cousin to provide provisions for her mission.  She fills her backpack with a map and essential food items, enough to last for a few days—bread, cheese, dried meats, and fruits both dried and fresh.  She supplements her diet by foraging for food, finding sweetpods growing underground in caves.  In addition, she temporarily gains a new sidekick, the caretaker’s son, who shares his family’s leftover lamb slices and freshly baked bread with her.

Later in the story, she camps out in the wild with a group of handsome soldiers and they serve her supper: fresh caught fish grilled over a campfire with beans and bread on the side.  What else could a girl ask for?
At home, Alex eats whatever her grandmother cooks.  Lentil soup or fish.  It’s good, but her grandmother is hardly a gourmet cook.  Her argument with the King had left her on a strict budget, not enough to hire servants, especially a cook.  But Alex can handle it.  Her tastes are simple and she loves coney stew, her favorite dish of all time.

Gossamer is the third book in the Chronicles of Eledon series.  It can be read as a single entrée, but it’s better as part of a full meal deal.  The first book is called Spell Breaker and the second is The Blue Witch.  The fourth book, Noble Magic, is still in the kitchen being prepared.

Thanks for stopping by to share your food for thought, Joni!

You can find Joni here:

Books on Amazon
Posted by Shelley Workinger at 7:17 AM