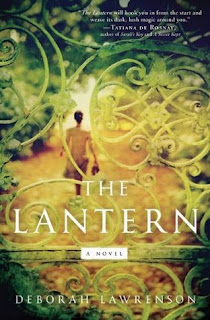 Food is a vital part of Eve and Dom’s sensuous life in the South of France. The naïve translator and the worldly older man connect on an instinctive level that seems - at first - set apart from the bleak realities of the lives they are both trying to escape. They fall in love and move into a crumbling Provencal hamlet, set apart on a hillside, where they lose themselves in the heat and light, in music and the imagination – and the fruits of the landscape.

That summer the house and its surroundings became ours, a time reduced in my memory to separate images and impressions: mirabelles, the tart orange plums like incandescent bulbs strung in forest green leaves, a zinc-topped table under a vine canopy; the budding grapes; the basket on the table, a large bowl; tomatoes ribbed and plump as harem cushions.

Simplicity seems extraordinarily close to hedonism when you find deep red “harem cushion” tomatoes the size of two fists in the markets of Provence. The tomato salads that Eve and Dom make with them is one of the most delicious and simple dishes known to man: sliced with onion and a handful of ripped basil, then dressed with olive oil, lemon juice, salt and pepper. It takes minutes to assemble and then all you need is a baguette, newly baked with a light crust from your favourite boulangerie in the Rue des Marchands in the town of Apt, to mop up all the juices.

Eve picks the mirabelles and wild plums that grow on the trees at the hamlet, and makes tarts and English crumbles. In September the first walnuts fall, and she stores them to attempt Tarte aux Noix, or to add to chicory and blue cheese salads. The figs from the tree in the courtyard intrigue her. 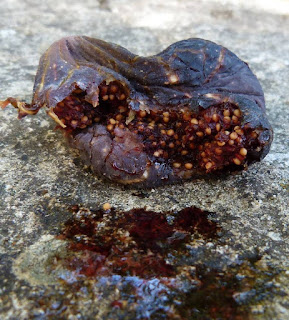 It was one of those days so intensely alive and aromatic you could hear as well as smell the fig tree in the courtyard. Wasps hummed in the leaves as the fruit ripened and split; globes of warm dark purple were dropping, ripping open as they landed with sodden gasps.
The pulse that pumped out the sweet, heady scent was quickening as I bent down to pick the fallen figs, then pulled them apart to find insects were already drunk on their scarlet hearts.

Eve prepares a bed of good fresh lettuce dressed with a tangy vinaigrette of Dijon mustard, honey, red wine vinegar and olive oil. Then she tops slices of bread with local goat cheese and fresh thyme from the garden and bakes in a hot oven with some slivers of jambon cru -Parma ham - and halved figs (perfect ones picked from the branches), each spread with a little clear honey. Everything cooks together for about 15 minutes, or until the cheese looks done. Delicious! 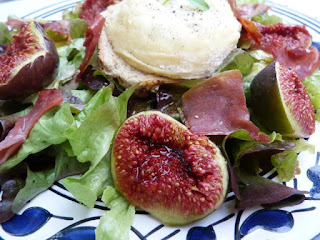 As their idyllic summer turns to winter, the lavender fields and vineyards now rows of stubble, the couple make traditional cold weather casserole dishes like Boeuf Bourguignon, beef slow-cooked in red wine, and the Moroccan-inspired Lamb Couscous, simmered for hours with almonds and apricots, aromatic cinnamon and nutmeg and hot chili and coriander. They don’t know it, but they need to keep up their strength for the shocking discoveries that are about to destroy their dream world…

Thanks for stopping by to share your food for thought, Deborah! 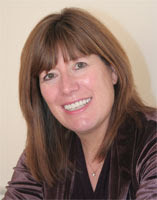 You can find Deborah here:

Posted by Shelley Workinger at 7:05 AM