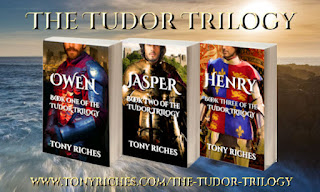 In the first book of the Tudor Trilogy, set in England in 1422, we find Owen Tudor, the Welsh servant who married a queen and founded the Tudor dynasty, in Windsor castle watching a royal banquet.

A fanfare of trumpets is followed by a procession of liveried servants carrying silver platters piled high with choice meats, which they take to each guest in turn, waiting while they help themselves from each platter, picking out tasty morsels with their fingers, the sign of good manners.

As well as cuts of beef, veal, pork, mutton and venison from Windsor Great Park, the guests are served with rare salmon, fresh river trout, eels and crayfish. The centrepiece of the banquet is a whole roasted peacock, served dressed in its own iridescent blue feathers, plucked and replaced after the bird had been cooked, its beak and feet gilded in gold leaf.

Even the wine goblets used by the guests follow rules of protocol, with the queen and top table drinking from gold plate, the next most important using polished silver and the lesser nobles provided with pewter. Servants are ready with flagons of wine as soon as any goblets are empty, so before long the buzz of polite conversation has taken on a raucous undertone.

A bishop calls them to order and the queen makes a short speech, thanking everyone for attending. Then there is another fanfare of trumpets and four page boys enter, carrying a model castle over a foot high, made entirely from sugar and complete with a miniature Royal Standard flying from the top. It is placed before the queen and the guests applaud as the young king smashes many days of hard work to pieces.

Owen watches as the banqueting guests become even more rowdy. Several of the younger lords, already looking the worse for drink, argue loudly about the merits of hunting stags or boars. He has learned it is best for servants to remain invisible, particularly if they are Welshmen.


Thanks for stopping by to share your food for thought, Tony! 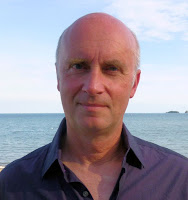 
Tony Riches is a full time author of best-selling fiction and non-fiction books. He lives in Pembrokeshire, West Wales with his wife and enjoys sea and river kayaking in his spare time.

The Tudor Trilogy is based on actual events, from the earliest days of the Tudors to Henry Tudor becoming King of England after his surprising victory at the Battle of Bosworth.
Posted by Shelley Workinger at 1:07 PM