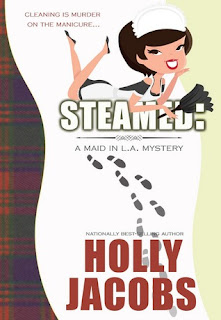 Thanks so much for the invitation, Shelley!  I always love talking about books…and food!

I once had an editor tell me that my characters spent too much time eating.  As someone who enjoys cooking—and eating—I told her I didn’t think that was possible.

Every book I write is a bit autobiographical.  I might not ever have run away from the world like my heroine in Just One Thing, but I have experienced loss.  I might not have ever given a child up for adoption like Pip in Carry Her Heart and Hold Her Heart, but I have discovered family I’d never met.  And I have never accidentally cleaned a murder scene, like Quincy in my Maid in LA Mysteries series (Steamed, Dusted, Spruced Up, Swept Up and this summer’s 5th book, Polished Off), but I do relate to her love of food.  And while I enjoy cooking, like Quincy I love having other people cook for me.

I took a bite of the salad.
“Wow,” I managed as I chewed.  This wasn’t head lettuce cut up in a bowl and slathered with ranch dressing.  This had greens, nuts and dried fruit, with some light dressing on it.
Cal forked up his salad and didn’t seem overly appreciative as he chewed it, then asked, “What I want you to do is try to remember everything you cleaned, touched or moved at Banning’s house.”
So, I tried to remember every step.  It was easier because I’d started going over all this for myself and my file.  I thought about telling him that.  After all, he’d made it clear he didn’t consider me a serious suspect.  But I still wasn’t positive I could trust him, so I simply worked at recreating the list, from picking panties off the ceiling fan, to steam cleaning footprints off the carpet.  When I mentioned the Mortie, Cal perked up.  “What was on it?”
I shrugged as I swallowed another bite of the salad.  “No idea.  It was sticky and a sort of rusty brown color.  It was all over the base of it.”
“Blood?”
“I don’t think so, though I’ve never seen dried blood on a Mortie before, much less cleaned it off.  I polished the award, and then I put it on the mantle.  It was on the couch when I came in,” I added.
Cal made a groaning sound and made a call on his cell.  “Test the Mortie for trace evidence of blood.”
He waited and I ate undisturbed.
I’d moved from my salad to a plate of pasta that Big G brought back.  It was just as good.  I was trying to decide what all was in the simple red sauce when Cal’s phone rang.
He picked it up, listened and said, “Okay.”  Then he clicked the button and set his phone down.
He turned to me.  “It’s official.  You cleaned the murder weapon.”
All I could think of was a wrinkled unicorn tattoo.

Poor Quincy.  She spends the first book, Steamed, in the (soon-to-be) five book series worrying she’s going to go to prison for accidentally cleaning a murder scene.  She’s worried that she’ll have to get a prison tattoo and realizes tattoos don’t always age well…which explains that wrinkled unicorn tattoo comment.  But she does meet Cal, who despite his frustration finds Quincy as intriguing as she finds him.  And she does visit her friend Honey (whose daughter is named Trixie…and all you Trixie Belden fans will recognize the pair) who’s also a cook, and is introduced to Big G and goes to Pattycake’s Pancake House.

So maybe that editor was right…there’s a lot of food in my books.  But there’s a lot of food in my life as well!  I just did a new Cooks and Books video.  It’s an ongoing, sporadic series I post online.  The newest one is about my easy-peasy Mexican Lasagna (https://hollyjacobs-hollyworld.blogspot.com/2018/01/cooks-and-bookmexican-lasagna.html) and how I tricked my young hockey-fan dinner guests into eating it.

Yes, I do the Cooks and Books videos because for me, food and books go together! Quincy feels the same way!

Thanks for stopping by to share your food for thought, Holly! 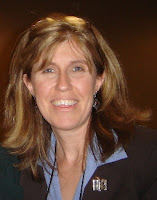 You can find Holly here:

Posted by Shelley Workinger at 12:30 PM