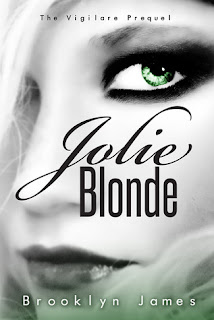 Brianna Bentley Castille (aka Jolie Blonde) fancies lobster and lots of it, the more clarified grass-fed butter in which to dip the succulent sea fare all the better. As a hard-pressed prosecutor for Orleans Parish District Attorney’s Office, the fork and veggies will have to wait. Just keep the protein-packed, vitamins/minerals-loaded lobster and butter coming, she’ll lap up the energizing essentials with one hand while the other works through cases and codes. Oh, and if you have a Sazerac, a Big Easy favorite, she favors it, too. Though keep the lemon peel for someone who has time for ‘garnish.’ If you’re interning at the firm, Café Du Monde is not a luxury but a morning necessity—two beignets and one café au lait heavy on the chicory, please.

This story of an average girl and the one twist of fate that made her extraordinary, Jolie Blonde is reinvented, an entirely new identity as Detective Gina DeLuca, at the wily hands of a hematologist, finding herself engulfed in a mysterious world of super blood (though a sci-fi/action-adventure tale, there are no vampires—i.e. no drinking/eating/ingesting of blood…blech) and super powers. Detective DeLuca doesn’t concern herself with beignets when a donut goes down just fine. And what grown woman, pray tell, needs milk in her coffee? Preferring it black and with the grinds, one may think she’s Greek! Finicky only about pizza, it’s nonnegotiable—margherita. Oh, and a beer—any beer—to wash it down.

In a series (The Vigilare Series) featuring aliases and identities, of course there is an alter ego, too. Vigilare—the one who watches over—who is she and why does she exist? The question both Brianna and Gina must answer to find themselves. Food’s good and all, but our antihero Vigilare subsides on retribution, her favorite dish to dole up…a kick-ass portion of just deserts!

Thanks for stopping by to share your food for thought, Brooklyn! 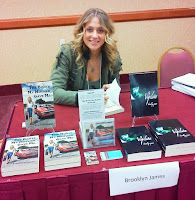 You can find Brooklyn here:


Brooklyn James is an author/singer/songwriter inspired by life in the Live Music Capital of Austin, Texas. Her first novel, The Boots My Mother Gave Me, has an original music soundtrack and was chosen as a Quarter Finalist in the Amazon Breakthrough Novel Awards.

When she is not writing books, she can be found playing live music around Austin as part of an acoustic duo. Brooklyn has been in a Weezer video, met Harry Connick Jr. as an extra on the set of When Angels Sing, appeared in Richard Linklater's Boyhood for all of a nanosecond, and she was Mira Sorvino's stand-in on Jerry Bruckheimer's Trooper pilot for TNT. She most enjoys being a wife and mother, reading, dancing, working out, and a good glass of kombucha.

Brooklyn holds an M.A. in Communication, and a B.S. in both Nursing and Animal Science. Her nursing career has seen specialties in the areas of Intensive Care and Postpartum. She serves as a Guest Speaker with a focus on awareness and prevention of Domestic Violence and Suicide.

Subscribe to her YouTube channel for music video releases. You can also find her music on Amazon, iTunes, iHeartRadio, SoundCloud, CDBaby, and Pandora.
Posted by Shelley Workinger at 8:30 AM