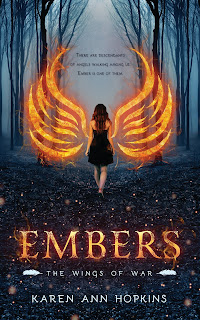 There are descendants of angels walking among us. Ember is one of them.

Embers is an epic paranormal adventure/romance about a girl who discovers that she’s immune to fire and any other injury when she’s in a horrific car crash that kills her parents. Following a violent episode with her aunt’s boyfriend, Ember flees Ohio to live with an old relative in the Smoky Mountains of Tennessee. Ember’s exuberance at escaping a bad home life soon turns to trepidation when she learns that she’s a Watcher, a descendant of angels.

While Ember is instructed about her heritage and the powers that go along with it, she strikes up friendships with two teenagers who live inside of a frightening walled compound in the forest. Inexplicably drawn to one of the young men in particular, an impossible romance develops. But it’s cut short when Ember discovers that her new friends are fighting on the opposite side of a war that’s been raging between two factions of Watchers for thousands of years. When the compound’s inhabitants threaten the townspeople, Ember takes action, sealing her fate in the ancient battle of good versus evil, and the grayness in between.

When Ember isn’t getting to know her neighbors, learning about her newly discovered powers, or battling creatures from darkness, she goes to the local high school and rides her horse on mountain trails. But she also spends a lot of time with her “Aunt” Ila, being taught how to live off the land. Ila is a Watcher with incredible powers and even though she could live in luxury anywhere in the world, she chose to settle down in a small cabin in the Appalachian mountains, where she grows all her own food. Respecting her ties to the earth and the animals that she exists with, Ila is also a vegetarian, so meat is off the menu in little valley surrounded by hills.

Ember has never eaten so healthy before, and she must adjust to a diet consisting of vegetables, fruit, nuts, grains, eggs, and goat’s milk. Ila shows Ember how to tastily live off the land, introducing her to homemade wheat pancakes, omelets loaded with vegetables, a variety of casseroles filled with pasta, beans, squash and potatoes, and scrumptious tomato sandwiches. Ember leans how to grow, harvest, and can the fruits and vegetables from Ila’s gardens. And Ila’s storeroom is stocked full of their bountiful hard work. One of Ember’s favorite pastimes is sitting on the front porch with her mentor, sipping fresh grape juice, and listening to Ila’s stories. Luckily, Ila also has a sweet tooth and her grandest treat is a special chocolate cake that even a demon and a growler can’t resist.

For all of her growing appreciation for healthy eating, Ember is still a teenager and enjoys snacking on soda, french fries, and cheeseburgers when she gets the chance. And that’s not a bad thing. With the end of days approaching, she’s going to need all her strength for the battles to come. 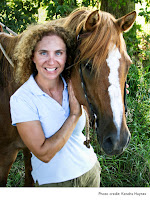 
Karen Ann Hopkins is the author of the urban fantasy/dystopian YA series, The Wings of War, along with a mystery/crime thriller series, Serenity’s Plain Secrets, and the YA Amish-themed romantic Temptation series.