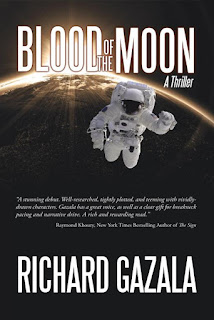 This is an interesting exercise, to write about how food impacted the writing or characters in my international conspiracy thriller, Blood of the Moon. I’ve thought about it a lot since I was graciously invited to contribute to this blog. I’m a good cook and an adventurous foodie. So it puzzled me all the more that in the exquisite mayhem I’ve forced upon characters in Blood of the Moon and my other writing, none of it has been comestible. After due contemplation, I deem this was more than simple oversight. It was error.

One of a novelist’s critical tasks is making fictional characters resonate with fleshly readers. Characters are people. Real people eat, or they die. Sometimes they die because they eat. If a picture tells a thousand words so does a person’s favorite dish, or the one he’d rather starve than eat. Whether it’s in survival or pleasure, food is refuge. Without it there’d be neither writers nor readers. Accordingly, it’s due more respect than I’ve afforded it in my work.

This is particularly so given what food sustains. Everyone’s relationship with food, whether healthy or otherwise, is fraught with meaning far deeper than mere mastication. I’m not the only one of us perpetually umpiring internal infernal battles between eating to live and living to eat. And I’m not just writing about my daily bread in this instance, so the symbolism is potent. Food is not just fuel to propel us from station to station in the mundane world. Like any other power or privilege, food is as dangerous as it is divine.

Though the movie was but a loose adaptation of Ian Fleming’s novel of the same title, a scene at the end of the 1971 film Diamonds Are Forever sprang to mind when I was approached to write a piece for this blog. After he saves the world from another of Blofeld’s abominable plots, James Bond relaxes with Tiffany Case in post-coital déshabillé in their suite on board the SS Canberra cruise liner. Posing as ship’s stewards, assassins Kidd and Wint wheel into Bond’s suite an opulent meal—Oysters Andaluz, shashlik, tidbits, prime rib au jus, and Salade Utopia. The wine is a bottle of Château Mouton Rothschild ’55. And for dessert, says Mr. Wint, “…the pièce de résistance… La Bombe Surprise.”

“Mmm! That looks fantastic. What's in it?” asks Case.
Wint replies, “Ah, but then there would be no surprise, Madame.”

The surprise was the dessert’s secret ingredient—an actual bomb. Murder, concealed beneath a luscious coating of creamy custard ice cream.

I’m currently working on Blood of the Earth, the sequel to Blood of the Moon. Beneath all the conspiracies, throbbing under the action and the chaos and the vengeance, the heart of Blood of the Moon is about faith and betrayal. It’s about the lies that hide in truth, and vice-versa. So too is its sequel, and much else of what I write.

Thanks to this exercise, as I write Blood of the Earth I’ll be mindful of the truth and lies in every morsel we eat. I’ll remember that every chef can charm with a fork as easily as he can kill with a spoon. That food giveth, and food taketh away. Primal stuff.

After all, Eve wasn’t evicted from the Garden until she bit the forbidden fruit.

Thanks for stopping by to share your food for thought, Richard! 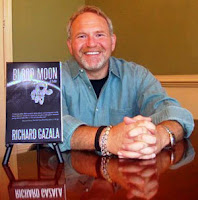 You can find Richard here: