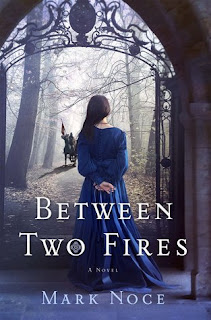 Thanks for having me here, Shelley! Today I’m blogging about the medieval meals that would’ve been enjoyed by the characters in my novel Between Two Fires. Set in Wales around the year 600 AD, there definitely were some culinary facts that I had to research and make sure to keep straight throughout my book.

One of the most apparent aspects was that this was before the Age of Discovery, which meant no New World foods. That means Medieval Wales had no sugar, no tomatoes, no corn (maize), or anything else that originated in the Americas. Due to the limited international trade of the era, tea from the Far East and coffee from Arabia were also unknowns at this time in Western Europe.

So what did they eat then? Plenty of meat and dairy for starters. In a country where the grass grows green and thick, it makes a lot of sense to raise sheep and cattle. That means milk and mutton for sure. But much of the landscape was still very rural and wild by our modern standards. Which meant vast forests with lots of game, such as wild boar and deer. In addition, the wet climate means that things like leeks and onions often grow wild, providing key ingredients for soups. Although not everyone might have been aware that such greens were essential for keeping away scurvy, it certainly added to the overall health of the local people.

Liquor was also very important. Many people distrusted water, not understanding how waterborne diseases were spread. So fermentation was a way to combat this. Cider actually would’ve been the most common, as apple orchards had been planted since Roman times and possibly earlier. The Picts in the far north supposedly even fermented heather into a type of ale. There would’ve been some wine imported from the continent, but this would’ve been for the church and aristocracy only. In addition, beer would’ve been brewed, probably darker varieties.

However, bread was surprisingly rare. People certainly raised grains, but not in the numbers we are accustomed to today. Plenty of rye and oats were grown, as they faour poorer or rain-soaked soils. Wheat and barely would’ve been reserved for the best, most fertile patches of ground. Although mush, stirabout, and oatmeal may have been common, actual milled bread would’ve been more of a noble’s meal, rather than a peasant’s. In fact, well into the late medieval era, even when bread became common throughout Britain, Wales in particular saw limited bread production. So much so that some Welsh considered it a “Saxon” food at times.

Cheeses and other dairy products would’ve been common. Fruits would’ve been harder to come by, mainly due to the climate and spoilage. Apples were usually pressed into cider for this very reason. They don’t keep long. Whereas a barrel of hard cider will be good for a long, long while.

To learn more about my novel (and the foods in it), I’ve provided a brief blurb about Between Two Fires.

But this fledgling alliance is fraught with enemies from within and without as Branwen herself becomes the target of assassinations and courtly intrigue. A young woman in a world of fierce warriors, she seeks to assert her own authority and preserve Wales against the barbarians. But when she falls for a young hedge knight named Artagan her world threatens to tear itself apart. Caught between her duty to her people and her love of a man she cannot have, Branwen must choose whether to preserve her royal marriage or to follow her heart. Somehow she must save her people and remain true to herself, before Saxon invaders and a mysterious traitor try to destroy her.


I’ve also written a sequel to Between Two Fires, entitled Dark Winds Rising. Both novels were published via St. Martin’s Press. To learn more about my work, check out the links below. Thanks again for having me here, Shelley!

You can find Mark here:

Books on Amazon
Posted by Shelley Workinger at 6:53 AM