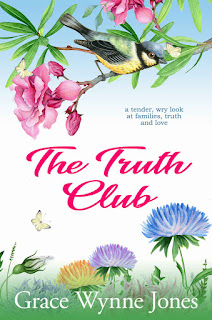 The Truth Club is not the kind of book where people go to lots of expensive restaurants or spiralise zucchini, they are far more preoccupied with trying to sort out their personal lives, which is why comfort food is frequently mentioned.

Sally Adams, the main character, is a journalist and likes munching a biscuit, especially if it is covered in chocolate.  Some months after a rather grand wedding she has left her husband, Diarmuid, because their views of love and marriage seem so different. (“I love sweet things, Diarmuid prefers savories.” As I say this I realise it pretty well sums up my marriage.  she reflects in Chapter Seven.)

A carpentry teacher and biology student, Diarmuid has become somewhat obsessed with some mice he's keeping as part of his studies, and often lovingly gives them mature cheddar cheese.  Diarmuid himself has a fondness for Turkish Delight confectionery, and almond biscuits which Sally stocks up on for when he 'pops round'. (They are 'keeping the lines of communication open.') But, usually, Diarmuid prefers savories. Sally and he met at a party where they ate 'big plates of spaghetti bolognaise'.

When Sally meets Nathaniel, a very tempting and understanding stranger, he invites her for a Chinese meal at a special place he knows, only it's  closed and it seems they'll have to opt for takeaway fish and chips. The dinner is ditched when Diarmuid phones demanding that Sally meets him. He has seen Sally and Nathaniel together.

But the resulting conversation isn't as fraught as it might have been. Diamuid announces, I have chocolate cake at home. A lovely big chocolate cake....A cake with lots of icing.  Since he had sometimes spoken of marriage as a cake that doesn't need icing and Sally  feels that icing is very important, this is a very seductive declaration. Perhaps cake can bring them back together?

Though Sally has quite enough conundrums on her plate, including a perplexing and distant relationship with her sister, her beloved Great Aunt Aggie adds an astonishing request to the mix. Aggie wants Sally to find her sister DeeDee who went missing many decades ago. Is DeeDee, for some reason, a black sheep? Why is it that the family hardly ever mention her? Aggie tells Sally that DeeDee loved Marble cake and wanted to visit Rio de Janeiro, which isn't that much to go on.

Thankfully Sally has some great friends who try to ease her complications. Fiona, for example, is happily married and expecting a baby and has a great job...though things aren't quite as they may seem on the surface.  When Sally visits her beautiful house Fiona offers her wonderful food. My parents are rather like Fiona in that they regularly acquire seductive foodstuffs and then get their guests to eat them. Without guests a packet  of high-grade chocolate chip cookies could last them a whole month.  Sally thinks in Chapter Five.

Would you like some lasagne? It's delicious. We got it from that swanky new deli. The chef is Italian. Fiona says in Chapter Three. Sally says yes because I am now in comfort food territory. Any time I'm with Fiona, I eat far more than I should, while she pecks at salad and radishes.

When Sally's eccentric pal Erika tries to drag Sally to the cinema Sally insists they both stock up on confectionery for it is a known fact that if only one person buys a packet of sweets she will spend the first half of the film trying to get the other person to eat it. But Sally's beautiful stranger, Nathaniel, is in the film queue, a woman is by his side and Sally doesn't want to face him. Instead they have singed pizza at Erika's house. I have never eaten non-singed pizza cooked by Erika.

When Sally, Erika and Fiona make a somewhat desperate quick trip dash to New York, each wanting to flee their worries, cake again provides comfort. The waiter arrives with the cakes. They look gorgeous, like ornate and luxurious hats with strange, delicious things poking out of them. The chocolate ones are virtually sculptures. Erika briefly forgets her almost unbearable grief and decides she wants the meringue, which is stuffed with fresh cream and raspberries and tiny chocolate truffles.

Goodness, typing that even made me feel hungry. I really do like a nice cake myself!

And I also really like a tasty review the book received from the Evening Herald: If ‘The Truth Club’ were a dessert, it would be a tiramisu....

Thanks for stopping by and sharing your food for thought, Grace! 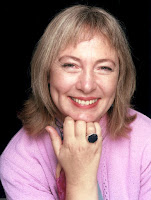 You can find Grace here: