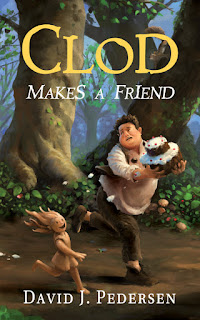 This was the 25th year my wife and I have hosted Christmas dinner for family and friends. My wife does all of the cooking, I do a lot of cleaning and even more eating. Our tiny house is filled with delicious smells of her dry-aged roast and a pumpkin dessert with yellow cake topping that has been dubbed “David’s dessert.” I always get a gentle hand-slap for trying to sneak away with it. That dinner is full of great memories.

Food is an incredible tool for writers that readers can relate to. If you've read any of my novels, you probably wonder if I have an obsession for cake. While I don't eat cake three times a day (life goal) it’s certainly one of my most favorite comfort foods. Not only do I love the taste and texture, cake means party since it is often served at celebrations. Even if you don't like cake, you get the significance.

In Clod Makes A Friend, Clod is bullied for being the only 9-year-old in his class without magic. More than anything he just wants a friend, so he makes one out of clay. To his surprise, she comes to life and introduces herself as Ada. Ada doesn’t last for very long, at first. Each chapter is a different year of their life. As time progresses, Clod gets better at sculpting Ada, she lasts longer, they become close friends, and occasionally get into some trouble. This novella tells the entirety of Clod’s life in 10 chapters, from age 9 to 57.

They have enough food to survive, but something like dessert is a luxury. When Clod brings Ada to the nearby town, well before anyone is awake, she discovers a bakery. A beautiful layered cake on display makes Clod swoon. Being a young child made of clay, Ada doesn’t always make the best decisions and sneaks through a pet door to sample the delicacy. Letting Clod in wakes the shop owner. Clod makes the terrible decision to grab an entire layer of cake and run off into the woods with Ada. It’s a great adventure, but not without consequence.

In a later chapter, powerful Shaman Millow visits their cabin to learn more about Ada. To engender trust, she introduces them to what is basically chai tea. After Clod does a favor for the shaman, she gifts Clod with more tea for Ada. Clod recognizes the significance as it is the nicest thing anyone had done for his friend.

In Clod’s impoverished life, treats like sweet tea and cake represent extravagance. Even though they can be stolen, it is better earned - just like any cake we would enjoy at our own parties. You may never know the power of cake until you read Clod Makes A Friend, but it may even save your life. 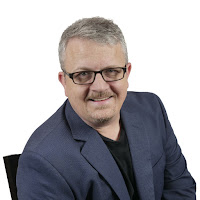 David J. Pedersen is a native of Racine, WI who resides in his home town Kansas City, MO. He received a Bachelor of Arts degree in Philosophy from the University of Wisconsin - Madison. He has worked in sales, management, retail, video and film production, and IT. David has run 2 marathons, climbed several 14,000 foot mountains and marched in Thee University of Wisconsin Marching Band. He is a geek and a fanboy that enjoys carousing, picking on his wife and kids, playing video games, and slowly muddling through his next novel.

Posted by Shelley Workinger at 9:26 PM