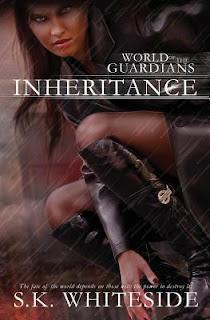 Whew! We certainly let the good times roll these past few weeks here in New Orleans. The struggle is most definitely real! Whoever thought that Daylight Savings time should be a thing should be killed (I want my hour back!). To make matters worse, us natives are just coming down from Mardi Gras: weeks of drinking, partying, parades, debauchery, and food.

I admit, when I was first asked to include something about a dish or food in my post I was a bit intimidated. I write about many things but food is NOT one of them. Then I thought about where I lived and all of the food.

New Orleans has beautiful architecture (albeit, complicated street names) and a rich (yet haunted) history…both key reasons why I chose to make home as the setting for my Inheritance series and its surrounding world. But New Orleans wouldn’t be the mecca that is without the staple of its food.

Delicious Cajun and creole food. If you are a health nut, New Orleans is not the place for you. New Orleans food is savory, rich, decadent, and smothered with things like sugar, liquor, sauces and gravies.

While many of my characters aren’t really pressed to eat the local cuisine (they prefer more metallic tasting nourishments), characters like Malachi engulfs it. A fallen angel, Malachi is not very sociable and can be a bit snarky as a means to keep others from getting too close. He made New Orleans his home over fifty years ago because it was the perfect place where he could be himself unabashed and be alone without anyone noticing him, or the fact that sometimes he talks to dead people. What he didn’t anticipate was falling in love with the city and even more so, the food. He prefers all things sweet and decadent (Bananas foster, Bread pudding and rum sauce, pecan candy) but his favorite?

None other than the New Orleans King Cake. 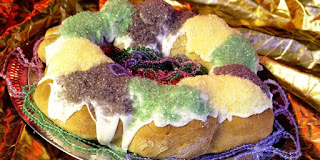 What is a king cake? Sweet, cinnamon bread covered in icing and sprinkles on top. Sounds simple but trust me, not everyone can make a good king cake. Some are filled, some are made from cake, some are made from donuts. The variations are so many that every year during carnival New Orleans holds the ultimate King Cake tasting festival. Winners get bragging rights for the next year. Some makers only sell during Mardi Gras which makes the demand for their cakes that much bigger.

Malachi however, is a man of tradition and only has eyes for the Randazzos king cake. Which sucks because they are only open four months out of the year. Every year he tries to stock up before they close but the cakes never last the week and all he is left with is a void and small bit of shame for his gluttonous ways.

If you are ever in New Orleans during Mardi Gras be sure to grab you one…or two…or five. Who knows, Mardi Gras was just last week, you may be lucky enough to catch an order before they close until next season!

Thanks for stopping by to share your food for thought, SK!

You can find SK here:

Books on Amazon
Posted by Shelley Workinger at 9:33 PM