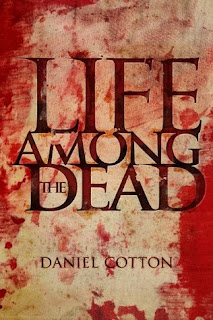 Food is one of the three keys to survival, but what happens when you yourself are put on the menu? In my zombie apocalypse series, Life Among the Dead, we meet an array of characters and see different ways to survive, from scavenging to homesteading. Whether they are heroes or villains they all share one trait, they need to eat. Food is not just sustenance to keep us going, it can also give us comfort, it can bring us together, it makes us feel human.

One of my favorite characters is Uncle Bruce. He uses a story about food to explain his theory of how the dead are rising. On a whim, before the apocalypse, he decided to use his vast resources to make himself a burger entirely from scratch, no preservatives. Everything he needed grew on his farm; lettuce, tomato, onions, and cucumbers that he pickled himself. He had cows for beef and even a pig for bacon. Bruce went so far as to make the cheese and buns himself. He was ready, the grill was fired up, but then he realized before starting that he had failed. Condiments. He could make mayonnaise, but didn’t know how to make ketchup or mustard. Preservatives are everywhere he concluded. Now, at the end of the world he contemplates if the stuff that keeps food food could be causing the new horror they face.

Through this four book saga of intertwining tales I sprinkled my own culinary tricks, how to grill perfect ribs, and how to make a virgin tiramisu simply by putting in maple syrup and leaving out the rum. The latter is revealed by another of my favorite characters, the underdog leader of the town of Rubicon, Simon Brass. Simon was a grocer in the world before and still employs his old trade in his new way of life. He makes displays in his store to move the hard to ‘sell’ items. He rations things in limited supply to prolong the inventory. Cake mixes and frostings are two things his fellow survivors snatch up quickly to commemorate dead loved ones, birthday cakes with no candles.

Not all the meals in the series are appetizing, unless you’re a zombie. Sink your teeth into this survival horror epic.

Thanks for stopping by to share your food for thought, Daniel!

You can find Daniel here:

Posted by Shelley Workinger at 8:39 AM