FOODFIC: Please Welcome Jayne Denker, Author of Down on Love 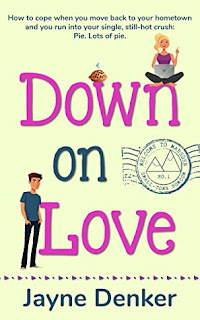 Thom started to pace, which wasn’t a very effective aggressive move—not in Georgiana’s tiny, shadowed apartment. For really good, forceful pacing, you needed more than four feet of free space. She didn’t have that—not by a long shot.

“Why can’t you think of someone other than yourself for once!” he exclaimed.

George bit the inside of her bottom lip to keep from guffawing in his face. Thom Tyler lecturing her about selfishness, when he’d written the book on it? Really? Instead of sniping at him, she took out her aggressions on a freshly peeled apple. Which looked a lot like his head, actually. Smiling now, she centered the circular apple slicer and gave a mighty shove downward. The sharpened metal blades thoomped neatly through the Twenty Ounce, and she thought she should feel a little guilty for imagining doing the same thing to Thom’s head, like in an old cartoon, from back when animated violence wasn’t frowned upon. She gave up on the guilt and relished the gory vision for a few seconds, then made her amends by picturing his sectioned head coming back together neatly and bloodlessly.

Georgiana Down, the main character in Down on Love, the first book in my small-town romcom series Welcome to Marsden, has a lot of stress in her life. She was downsized out of her job as a graphic artist, broke up with her emotionally abusive boyfriend, and now lives in a drab apartment with a weird roommate. Meanwhile, her sister is haranguing her to return to their tiny hometown in the Catskill Mountains in central New York State—a place she hasn’t visited, let alone lived in, in fifteen years. She has two activities in her life that relieves her stress: her successful anti-romance advice blog (Down on Love) and baking pies.

When I started writing Down on Love, there was nothing in my notes about George baking pies. (And I take a lot of notes before I start writing.) I don’t know how it came about that George’s “thing” is baking, and only pies, but I definitely drew on my personal experience. I learned how to make pies back when we rode dinosaurs to school, in what was then known as home ec class. Did you ever have one of those teachers, one you just knew would teach you something (or many things) you would carry with you the rest of your life? Sister Dismas was one of those teachers. She was a Sister of Mercy who also was the best geometry teacher since Euclid, had been a missionary in Africa and always had great stories about hanging out with cannibal tribes, and had the best from-scratch apple pie recipe. I mastered it at 16 and have been using the same recipe ever since. When I realized Georgiana needed a stress-relieving hobby, having her bake pies—using that same recipe—was the perfect fit.

After all, pies are comfort food, something George craves. I recently held a pie-themed giveaway, and one of the prizes was a plaque that said “All I’m saying is you rarely see someone crying and eating pie at the same time.” Now, that’s some top-level philosophizing right there. And true! Pies are associated with home, comfort, family gatherings, home-cooked meals, and definitely that funky diner in town—you know the one, with laminated menus and vinyl booths and the dessert carousel at the end of the counter filled with pies and pudding, rotating endlessly, tempting you to indulge even though you just polished off a cheeseburger the size of a small planet.

I don’t think it’s giving away much to say that George’s pies play a role in some key scenes in Down on Love, as well as in Picture This and Lucky for You, the second and third books in the Welcome to Marsden series. Do they end up in that dessert carousel in the diner?

You bet your Granny Smith they do.

Thanks for stopping by to share your food for thought, Jayne! 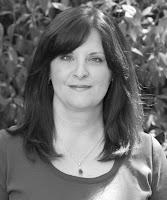 You can find Jayne here:

Posted by Shelley Workinger at 10:38 AM