FOODFIC: Please Welcome Back Carole Bumpus, Author of A September to Remember 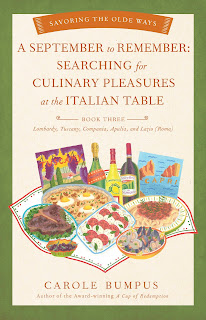 Drawing from an excerpt from my newest book, A September to Remember: Searching for Culinary Pleasures at the Italian Table, I’ve decided to share one of the unique culinary experiences we had the pleasure to enjoy:

A FORAY THROUGH A QUAY IN GALLIPOLI

Like the sea-loving lemmings that we are, we headed toward the sea—the Ionian Sea. We crossed a sixteenth-century bridge that connected us to a small island that was the oldest part of the city and its ancient seaport. Almost completely surrounded by fortress walls dating back to the thirteenth century, Gallipoli, meaning “beautiful city,” is charming and exotic. Legend has it that this strategic location, which includes Porto Cesareo, became an early part of Magna Graecia (Greater Greece) and remained so until 265 BC, when the Greek king Pyrrhus, presumably after one too many disastrous victories, was defeated by the Romans. Yes, the city was frequently under siege—hordes of Vandals, then Goths—but once the Byzantines (predominantly Greek-speaking Romans from Constantinople during the Middle Ages) entered, the town was rebuilt and remains much in the style and architecture we saw at that time.

We parked the car near the bridge, and as we were walking on the quay toward the old town, we saw below us a small contingent of colorful fishing boats with fishermen hawking their bounty. As we walked closer, a swarthy-looking fisherman approached us, smelling much like—well, fish—holding what looked like a couple of small black balls of spines. We had no idea what he was saying, but he beckoned us toward his boat, where he cracked open a live sea urchin—yes, that’s what he was holding. He pulled a miniature pink plastic spoon from his pocket and proceeded to feed us directly from the innards of this little crustacean. Like a mother bird feeding her young, he hovered over us, lovingly spooning an incredibly creamy, fresh, yet salty delicacy of orange-colored strips into our waiting mouths. We stepped back and swallowed; we had never tasted anything quite like it, and we didn’t know how to thank him. Were we to purchase a bunch of them? And put them where? How would they stay fresh? Would they keep in the back seat of a hot car? We offered payment for what we had eaten, but he just slapped Win on the back, grinned a toothless smile, and walked on to the next group of tourists coming down the steps.

We were oddly charmed. We felt somehow welcomed by this simple gesture—like receiving communion, along with a blessing—and as we continued down the quay, we moved with a different bounce in our step. So, now that we had been accepted, or made the grade, so to speak, we could begin our tour of the old town with renewed vigor and expectation.

Thanks for stopping by to share your food for thought, Carole!