FOODFIC: Please Welcome Nicki Chen, Author of When in Vanuatu 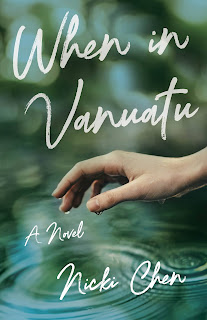 No matter where you travel, you’re bound to return with memories of what you ate. Some of those memories will stay with you for years and years. You’ll tell friends about the pizza in Naples or the Spotted Dick in Canterbury or the generous bowl of lime wedges that came with your rum-and-Cokes in Puerto Vallarta.

I used to smile at the obsession my late husband and his colleagues seemed to have with food. While we were living in Asia, we attended many wine dinners—festive meals served around large round tables with a Lazy Susan in the middle. While we ate, the conversation would touch on politics and shop talk. But the main topic was always food. As each of the eight or ten courses was set on the table, it would be quickly praised. Then, my husband’s colleagues, who all did a lot of business travel, would start discussing the best place to eat crab in Bangkok or grilled freshwater eel in Seoul or night street food in Kuala Lumpur.

My new novel, When in Vanuatu, is about living in a foreign land and marriage and infertility. It begins in Manila, moves to Vanuatu, and ends up in Seattle. It is not about food. And yet, food is everywhere in it.

In the opening pages, Diana and her husband take a brisk morning walk along Manila Bay. Before turning back, they stop at McDonald’s, where, over eggs and pancakes, Jays breaks the news about his upcoming trip to Korea. “I’ll be leaving Thursday morning,” he says, sliding a pat of butter between his pancakes and slapping another on top. Diana stabs her egg and watches the sticky golden yolk bleed into the white and then down the sides of her pancakes and onto the plastic plate. Didn’t he remember that Thursday was supposed to be the start of her fertile period?

McDonald’s? you say. The food starts at McDonald’s?

A few days later, Diana is pulling up at Dulcinea, a Spanish bakery where she is meeting friends for midafternoon churros y chocolate. As she opens the heavy glass door, leaving behind the stink of diesel, sweat and roadside garbage, she steps into a room smelling of toasted sugar, melted butter and coffee. The ladies, talk and laugh, they share their concerns and make plans for Christmas. All the while, they’re sprinkling sugar on their freshly deep-fried churros, dipping them in little cups of thick Spanish chocolate, and licking their lips.

With the novel set in the Philippines, it’s inevitable that Filipino dishes would make an appearance: pancit, pork adobo, ginataang, and Jollybee’s Amazing Aloha Burger for a start. Like most of the world’s cities, though, Manila and Port Vila offer an international selection of restaurants.

When Diana and Jay lose electricity in their apartment, they eat tempura and steak teppanyaki at the Westin Plaza. At Jay’s Executive Dining Room, they opt for the daily special: tom yum soup, crystal noodles with prawns, Thai basil with chicken, and mango ice cream. When they take a visiting colleague and his girlfriend out to a Spanish restaurant, Jay and Diana order sangria and paella Valenciana. At the girlfriend’s insistence, she and her date share black paella, a tasty dish made black by the squid’s ink.

In Vanuatu, fish and fresh fruit are readily available. Diana and Jay dine out on seafood and pastries, French and Chinese food. Though McDonald’s hasn’t made it to Vanuatu yet, Cheerios has. Looking out over a blue lagoon on her first morning in Vanuatu, Diana eats Cheerios on the hotel’s patio. It’s a touch of normality for her amidst the exotic landscape and her still unknown future.

I can’t imagine inventing characters who don’t cook and eat and talk about their food.

Thanks for stopping by to share your food for thought, Nicki! 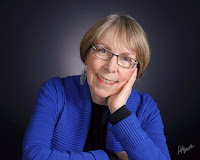