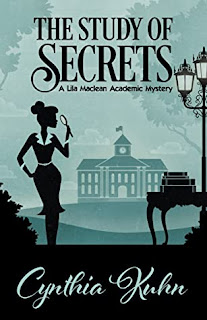 While the English-professor-turned-amateur-sleuth in the Lila Maclean Academic Mysteries isn’t much of a cook, she does have her share of happy food encounters. But I’m going to confess something here: I don’t always know at first why certain foods are in there. Some details that emerge when I’m drafting the novels are unexpected but reveal their place or purpose eventually.

For example, in the fifth book in the series, The Study of Secrets, Lila is on sabbatical in Larkston, away from her Stonedale University campus, and when she meets other characters from the new town at a local diner, they insist that she order the house specialty, a slice of pie. It’s so incredibly good that the next time she is at the diner, she’s the one who makes her two visiting friends order the pie, and they have a conversation about what makes the item so magical.

Someone once asked me if I was hungry for pie when I wrote it. (I wasn’t.) But while I was writing the first draft, the pie showed up and once it was there, it felt right in both scenes. Lila’s initial pie appreciation establishes a sense of bonding with a new group of people, then later when she is the one who pushes the pie, it tells us something about her developing connection to the new community.

Elsewhere in the novel, there is a town tradition involving chocolate-dipped candy canes, something people feel so passionate about that they get into a shouting match during a holiday party planning meeting. I don’t know where that came from. I have never had a chocolate-dipped candy cane. But they popped up during the drafting and ultimately added a small but helpful sense of tension to the chapter, which I deepened in other ways during the revision phase.

These are very sugary examples, but please don’t worry—sometimes the characters have salads too!

Thanks for stopping by to share you food for thought, Cynthia!

You can find Cynthia here:

Cynthia Kuhn writes the Starlit Bookshop Mysteries and the Agatha-Award-winning Lila Maclean Academic Mysteries. She lives in Colorado with her family and serves on the national board of Sisters in Crime.

Posted by Shelley Workinger at 8:06 AM