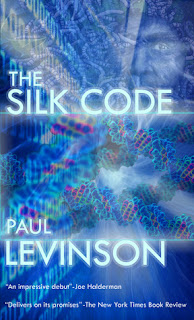 Dr. Phil D’Amato – NYPD forensic detective, protagonist in my Phil D’Amato series, of which The Silk Code is the first novel – orders a refill of his large glass of orange juice, when Tesa Stewart, a professor of anthropology at New York University and an expert on Neanderthals, joins him for a crucial breakfast meeting at a bistro in Greenwich Village.

It’s too early for most people to drink anything with alcohol anyway, but Phil would have ordered the orange juice or some other non-alcoholic beverage even if this meeting were in the evening. His brain was his most effective weapon in his fight against crime and unclear perils, and he liked keeping it as clear and sharp as possible.

He would have ordered organic orange juice, if the bistro had it, but at least this was fresh squeezed, a delicious influx of instant energy. Tesa barely poked at the breakfast she had ordered, teasing at the edge of her poached egg with her fork. The case she was discussing with Phil was too disconcerting for her to eat.

But Phil drank his orange juice and smacked his lips. He found frightening things and the attempt understand them “among the most exhilarating feelings in this world”. And the liquid energy orange juice fueled his exhilaration and his confidence.

My daughter Molly, 12 years old when she first read The Silk Code, which I had accidentally left on the kitchen table overnight, said, “Daddy, Phil is just like you!”

Certainly true about the love of orange juice.

Thanks for stopping by to share your food for thought, Paul! 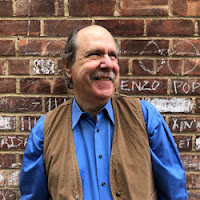 You can find Paul here:

Posted by Shelley Workinger at 1:33 PM