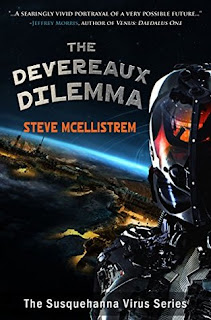 My characters – in The Devereaux Dilemma and its sequels – reside in the future, where food is both better and worse than it is here in the present. There’s nothing like a good flavor enhancer to deliver pleasure to the palate, but one must be careful. Sometimes that delicious food comes with a bit of a kick.

At one point, Doug is offered a sandwich that looks unappealing:

He bit tentatively into the bread, hoping not to gag. But it was delicious, almost melting in his mouth. “Wow, this is fantastic.” Taking a huge bite, he chewed slowly, savoring the rich mushroom and bean flavor, commingled with onion, garlic and some spices he could not identify. He realized he was famished. As he ate the sandwich, a warmth slowly spread through him.

“Thanks for makin’ me try it,” he said to Zeriphi. “I’ve never tasted anything like it. You’re a marvelous cook.” The Escala exchanged glances and smiles. Doug felt the need to explain his hesitation. “It just looked awful. Can I have another one?”

Zeriphi moved her chair closer to Doug’s and prepared another sandwich for him. While he ate, she continued to stare at him and he found it increasingly difficult to turn his attention away from her: her blond hair, high cheekbones, rounded face and dark brown eyes, large and luminous. They pulled at him, drew him in until he saw nothing else. As they gazed at each other, he felt like he was under a spell, finally broken by Quekri’s voice:

“Zeriphi will keep you company tonight.”

Zeriphi nodded. “Eat,” she said as she lifted the remainder of the sandwich to his mouth.

Should Doug complain at being drugged with an aphrodisiac that gives him an unquenchable desire to sleep with Zeriphi? After all, she’s a beautiful woman. And pleasure does in fact ensue. Still, there might be a good lesson to take away from it all: one may want to hesitate before accepting food from a stranger.

At least Doug is perhaps doing better than Colonel Truman, who’s getting processed meat and cheese on bread that has no flavor enhancements added, all while enduring the sanctimonious musings of Attorney General Gray Weiss.

In addition to providing sustenance and the occasional opportunity to drug one’s guests, meals are a fine way to pass information, to absorb opinions and beliefs, to get to know people better. And a meal shared is almost always better than one eaten alone. Because it’s very often not about the food.

Thanks for stopping by to share your food for thought, Steve!