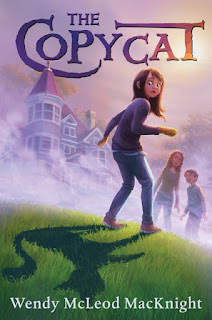 Ali Sloane has a lot going on in her life.

Like moving all the time because her parents struggle to hold down job.

Having a difficult time fitting in at all the new schools she’s forced to attend.

Dealing with her dad’s low moods.

That would be a lot for any kid, but there’s this other thing: her dad’s side of the family are Copycats, which means they can basically change into any living thing.

But now that she and her parents have moved in with her great-grandmother, Gigi, maybe things will be (hopefully!) normal, or at least normal-ish.

But like her father Digger, who’s been known to turn into a bat at the breakfast table, and makes pies when he’s worried about something, Ali has a complicated relationship with food, and definite rules about what she likes and dislikes.

• Vegetables are not your friends.

• Raisins are an unwelcome surprise.

• Always cut the toast on the diagonal.

• The cinnamon and sugar should not be mixed in advance when you make cinnamon toast.

• If you’ve never eaten it before, do NOT agree to try it.

Like Ali, I used to be furious when my parents chopped the vegetables so finely there was no way to eat around them. And I had definite views on what I would and would not eat. It drove my parents around the bend!

Trying new things — including food — is an important part of growing up. I really wanted my readers to see that for Ali, food was the one place where she could exert some control over the things that were happening in her life. For some kids, that kind of control can lead to eating disorders; in Ali’s case, it’s led to becoming a picky eater.

But as Ali makes friends and discovers the real her, she starts to think of food differently, focusing on what she likes instead of what she hates.

And guess what? I think by the time she gets to be my age, she may change her mind about the things on the list above. Except the raisins, she will never love raisins!

Thanks for stopping by to share your food for thought, Wendy!

Wendy McLeod MacKnight is the author of three middle grade novels, all of which are set in New Brunswick: It’s a Mystery, Pig Face! (2017), The Frame-Up (2018), and The Copycat (2020), which was a Rocky Mountain Book Awards finalist. She’s represented by the LKG Agency in NYC and has received the 2017 Atlantic Booksellers’ Emerging Author award, called One to Watch by Quill and Quire magazine, and been reviewed in the Wall Street Journal. Her last two novels were named best books by the Canadian Children’s Book Centre. The Frame-Up has also been published in Taiwan and will be published in French by Bouton d’Or Acadie in the coming year.

Posted by Shelley Workinger at 8:42 AM