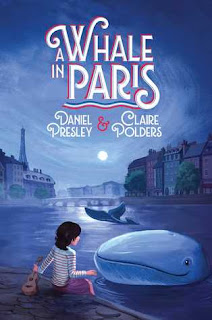 Chantal and Papa live in Paris during the Second World War. Nazi forces occupy the French capital and steal crops from the surrounding farms to feed the German soldiers. Parisian citizens, like the characters in A Whale in Paris, invent new ways to find food and fill their stomachs. Chantal and Papa fish for salmon in the Seine at night.

Unfortunately, they’re often unsuccessful. Most days Chantal eats nothing but stale bread for breakfast. She must get by without the things she once thought essential, such as hot croissants and hazelnut macarons. But sometimes the stars align. Sometimes she and Papa catch a large fish and take it home in a bucket. Sometimes the priest of the Notre Dame gives Chantal an armload of zucchinis as a reward for working in his vegetable garden. Sometimes Papa has enough ration tickets left to buy flour and butter. Sometimes Aunt Sophie trades on the black market and brings them fresh eggs in a bundled handkerchief.

And then… then Papa bakes his super-delicious salmon quiche—Chantal’s favorite dish. The full recipe-spectacle is in the book, but let me serve you a taster here:

Papa makes the crust with flour and water, rubbing the butter in with his fingertips while singing. Singing helps the dough stay pliant and moist.

He pats the crust into a round tart tin and trims the overhanging dough with a letter opener or other object of sentimental value that doesn’t belong in a kitchen. He lights the gas oven and says, “Voilà!” like a vaudeville magician.

He bakes the salmon filet in a pan for fifteen minutes, but not before thanking the fish for jumping onto the hook. He also sautés the zucchinis with salt and herbs de Provence. The smells that circle up from the stove into Chantal’s nostrils are warm like love.

Whistling, Papa cracks the eggs into a bowl and whisks them with an eggbeater. He removes the salmon from the oven, forks it into soft steamy flakes, tastes a bite or two or three, adds pepper, and sneezes.

He stirs everything together, the salmon and zucchinis and eggs, pours the mixture into the crust, and bakes the dish for another twenty-five minutes. When the super-delicious salmon quiche is finally done, he serves it with a flourish, as though he’s created something magical.

He has. Chantal and Aunt Sophie already sit waiting around the kitchen table when Papa cuts the quiche into six pie slices. Chantal first consumes the steam coming from her plate, breathing it in; the nose must be fed before the belly. Then she eats her slice as slowly as possible, savoring every bite.

Does this make you hungry? Please read the book for more!

Thanks for stopping by to share your food for thought, Claire! 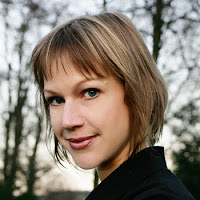 You can find Claire here:

Posted by Shelley Workinger at 8:22 PM