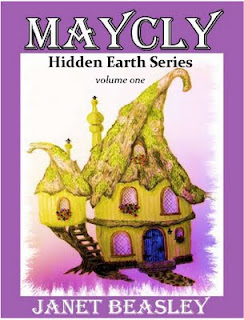 Maycly (book 1 of my 6-volume Hidden Earth series) is the epic fantasy tale of Iona, an Earth girl who never questioned her trust in SUL (Sorcerer of Unequivocal Leadership, Creator of the planets Earth and Maycly) until she develops multiple chronic illnesses, loses her wealth, and is forced to deal with the mysterious disappearance of her last 3 living family members. Her story explodes when a very special puppy shows up on her doorstep, taking us on a journey to the captivating world of Maycly. This novel has it all: twists and turns, monumental battles, illustrations of never-before-seen flora and fauna…and recipes.

Maybe I should take a step back here and tell you how the series came to be. As a child, I was always in the kitchen baking with Mom and Gramma; I was also involved in 4-H, as well as open-class county fair bake-offs where my baked goods placed within the top 2 most of the time. This led me to work in a restaurant, from which I resigned when the owners sold the business, not wanting to work without my original crew. When I left there, our family recipe for Gramma Hildie’s Doggie Delights was handed down to me so I could continue the legacy. Yup, that’s right – gourmet dog treats. Now, being the creative person I am, I couldn’t help but grow those original 2 flavors into 11, then develop 4 different styles.

Next thing I knew, I had people treats entering my bakery as well; all kinds of original-recipe muffins, brownies, cookies, etc. found their way onto my shelves. So I took the next step by laying out the menus, plans, and venues for 4 very differently styled restaurants. But stacking chronic illnesses brought my dream to a screeching halt. I was devastated that all my hard work would fall by the wayside, but I knew that I couldn’t give up – I just had to find a new way to go.

That’s when I turned my creativity to epic fantasy writing. It wasn’t until nearly completing my first novel, Maycly, that I realized I should use all of my work on recipes and restaurants in Maycly’s world! So when the novel comes out (if it hasn’t already by the time this posts), readers will enjoy not only a great story, but also get my never-before-released recipes and menus!

Many established fans have asked, “Will Gramma Hildie’s Doggie Delights be included?” and my answer is, “Yes! Along with many other favorites, like the Best Darn Brownies Ever and Cotton Candy Muffins.” The series will feature not only an original plot, but original recipes from the bakery to the bark-ery; each new Hidden Earth novel will bring new characters, action, adventure, and recipes and restaurants! I certainly hope that every fan will find a favorite in the novel, and let me know which recipe they liked best ;) 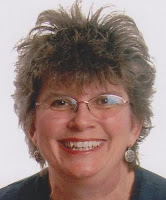 Thanks for stopping by and sharing
some food for thought, Janet!

Posted by Shelley Workinger at 12:22 AM