FOODFIC: My Teacher Is an Alien - Bruce Coville 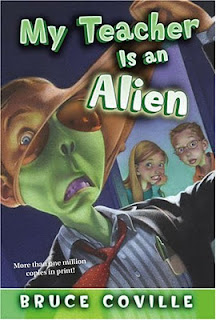 My son asked me to do this week’s post on the same book he’s doing his book report on, so, for his 7th birthday*, I’m taking on a middle-grade pick.

Sixth-grader Susan Simmons is immediately put-off by substitute teacher Mr. Smith because he’s replacing her favorite teacher, Ms. Schwartz, for the rest of the year. He doesn’t win any points with her when he announces he intends to straighten the class out, either, because, as Susan points out: you know how boring a straight line is. And the fact that he hates music so much that he literally shivers every time picks up her piccolo to leave for her lesson completely solidifies her feelings.

Yet, none of those are the reason she follows him home after class…all the way into his house. She’s actually there to stealthily retrieve a note he confiscated from her in class, and only opens his door when she hears an inexplicable but horrible shrieking inside. Turns out, Mr. Smith isn’t being tortured (or torturing someone else) as Susan feared; he’s only enjoying the “music” of his mother planet. That’s right; Susan even watches him peel off his fake human face to “call home” on his special monitor.

It takes little convincing for her friend Peter to declare the need for a return visit/further investigation, and that’s where my favorite part comes in:

Looking for evidence that Mr. Smith is indeed an alien, Peter goes straight to…the kitchen! “Who knows what they eat on the planet he comes from?” he asks.

Exactly what I would’ve thought and done!

They scope out Mr. Smith’s fridge and find (typical of the bachelor he is…or pretends to be): cold cuts, a half-empty carton of milk, a bottle of catsup, and two six-packs of beer. Peter astutely notes, “He sure doesn’t eat like an alien.”

But even though everything looks innocent enough, Peter’s not done; he insist[s] on checking the cupboards. He even open[s] the peanut butter jar to see if it really ha[s] peanut butter in it, and not some kind of extraterrestrial goo.

Atta boy, Peter; way to teach readers to leave no stone unturned and no jar unopened! And also for showing any aliens who read this book that their worthiest human adversaries may not be the biggest and tallest ones. ;)

*Who’m I kidding? His birthday has nothing to do with it; I’d do anything for that kid, anytime. <3
Posted by Shelley Workinger at 7:23 AM