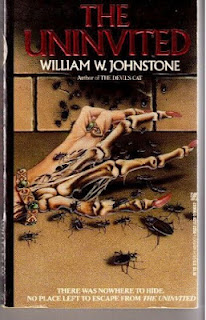 I recently reviewed this oldie-but-goodie for Zompacolypse 2011 at Paranormal Wastelands, but I couldn't resist taking a FoodFic look at it, too!

The characters in this book don’t eat much; they’re rural Lousianans going about their daily lives, leaving behind houses with the lingering aroma of hotcakes and bacon from breakfast or putting pie in the oven and a pot of coffee on for a friend who’s coming over. One foursome does smoke pot, which is a dead giveaway that they’re done for as per Rule # 2 from the kid in Scream (only topped by Rule # 1 – don't have sex – which this group is also doing when they bite it).

Oh, and one guy briefly mentions the hamburger he ate last night that’s about to resurface after he witnesses a chest cavity full of cockroaches on the autopsy table. Yum.

But the main meals aren’t being eaten by the humans; they are the humans. And the roaches are eating them clear to the bone, leaving remains so stark they glow in the dark.

One character notes (before they even know what they’re dealing with):
A roach will eat almost anything. They’ve even been known to eat the eyelashes and eyelids from sleeping people.

We’ve all heard that cockroaches are the one thing that can survive a nuclear blast; that if life were to be annihilated in all forms, they’d remain. I used to wonder what they’d eat once they found themselves in such a barren landscape; I guess now I have my answer – anything it takes to survive.
Posted by Shelley Workinger at 7:56 PM