Read his thoughts, view his exciting trailer,
and enter his contest! 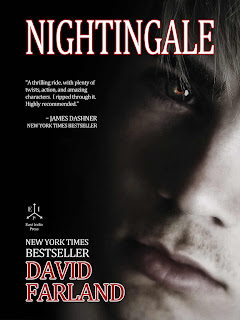 Abandoned at birth, shuffled from foster home to foster home, Bron has never known how it feels to belong, be cared about, or cared for. His bleak childhood is perhaps best instanced by his latest foster mother's hoarding of all delicious and nutritious delicacies, relegating Bron and his 8 foster siblings to pathetic pancakes - food that's about as bland and unnourishing as it gets.

When, at 16, he's kicked out of Melvina's house - allegedly for stealing peaches to eat - and sent to live with the Hernandezes, he's afraid he'll have to eat burritos at every meal - the Mexican equivalent of the pancake regime he's been stuck with. But instead he finds every food a delight, from barbecue chicken to omelets filled with fresh tomatoes, sharp gorgonzola, smoky ham, and pine nuts. And Olivia Hernandez nourishes his spirit as well by recognizing something special in Bron - that he is something her people call a "Nightingale," a creature not quite human.

As part of his new foray into self-discovery, he meets the Weigher of Lost Souls - an ancient woman with marvelous powers - on an elegant houseboat where he's served a gourmet vegetable lasagna made with sun-dried tomatoes, eggplant, and some of the world's rarest mushrooms. The food whispers to Bron that he is about to enter a world that is richer and more exotic than anything he has ever dreamed of...and one that he may never return from.

Because despite all the delicious wonder this new world has to offer, Bron still needs answers to the mystery of his birth: What am I? Where did I come from? He must now risk his life to defeat the epic forces that have combined to claim him, to tear him from the only home, family, and girlfriend he has ever known.

Sound good? Looks even better! The book trailer is made up of art, animation, and music that is actually taken from the enhanced novel, setting the tone for the story.

Experiment with the web edition and read some chapters at:

http://nightingalenovel.com
When you’ve taken a good look, just email David your opinion of the trailer, putting “Drawing 34” in the subject line. That’s it! He wants real reader input and is dying to hear what you have to say. :)

The winner will be chosen December 19th and will receive the web edition of the Nightingale enhanced novel. (iPad or Kindle not necessary; entire book, including music and animations, can be experienced from any computer. Good luck! 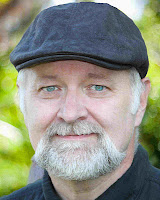 David Farland is the international bestselling author of nearly fifty books, including such award-winning novels as the science fiction masterpiece On My Way to Paradise (Philip K. Dick Memorial Special Award Winner, Best Novel in English Language) and the historical novel In the Company of Angels (Whitney Award Winner: Best Novel of the Year). He is best known though for his fantasy work, which includes the New York Times bestselling series The Runelords, and his lovable and wacky middle-grade fantasy series Ravenspell.

In addition to writing novels, Dave has also worked in videogames on such international bestselling games as Starcraft: Brood Wars, and Xena: The Talisman of Fate.

And, through his work as coordinating judge of the Writers of the Future, as a creative writing instructor at Brigham Young University, and by teaching writing seminars, Dave has worked extensively helping new writers. Many of his students have gone on to become some of the most successful writers of our time, including such #1 international bestsellers as Brandon Sanderson, Brandon Mull, and Stephenie Meyer.


You can find David at:

And see what reviewers are saying about Nightingale:

Thank you for stopping by to share some food for thought, David!
Posted by Shelley Workinger at 7:32 PM