FOODFIC: Please Welcome Richard Due, Author of The Moon Coin 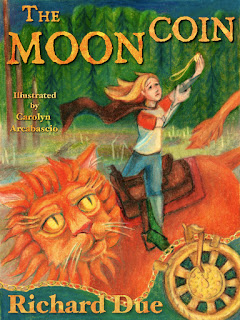 The Moon Realm is a dangerous place, as Lily and Jasper Winter know full well from listening to their Uncle Ebb's many bedtime tales. Flying dragons. Stomping giants. Troublesome Faeries. Horse-sized, catlike Rinn: eyes the size of dinner plates, razor-sharp claws, mouth full of pointy teeth. (You really don't want to be standing next to one when its tummy is rumbling. Trust me.) And it's not just Lily and Jasper who have to be careful. Take the wyflings, who look like child-sized otters with clothes. Quite snack-able by Rinn standards. In this scene, Nimlinn, a very important Rinn, is nearing her breaking point as she commands Snerliff and Twizbang, both wyflings, to complete a task they deem full of future peril.

Snerliff eyed the pair of clipping shears—in his own hand!—as though it were a poisonous snake. “You want us to do what?” he shrieked.
Nimlinn's eyes narrowed. “Groom me for saddle,” she said, her voice simmering.
“But—” yelped Twizbang, “Greydor will eat us!”
“No!” bellowed Nimlinn. And then, speaking more quietly, “He may want to eat you, but I would never allow that.”

Sometimes, in the Moon Realm, the one doing the eating is much more gratified than those surrounding him. Take this scene, in which Marred, a human and a dragon slayer, shares his love for a peculiar . . . delicacy?

He held up his prize triumphantly.
“The igniter organ!” he announced, looking very pleased. “You wanna talk spicy?” He rubbed his stomach for emphasis.
“I think I'm going to be sick,” said Boots, placing a hand over his stomach and turning away from the sight. He wasn't the only one.
“They're best pickled,” Marred explained to Lily, rummaging through a pack by the fire and pulling out an earthenware jar. The jar fizzed loudly when he opened it, and its odor caused all in the immediate vicinity to scatter. Quib, though, with a dreamy look in his eyes, smacked his lips hungrily.
Marred popped the organ into the liquid and recapped the jar.

Being a vegetarian can be pretty tough going in the Moon Realm, as Lily finds out at her first meal. In this scene, Quib, a man on a mission to see his crew well fed, tries to wrap his mind around the idea of being a vegetarian.

Lily chose this moment to step out of the darkness and into the firelight. “Just beans for me,” she said brightly. Her stomach was empty, but not that empty.
An odd stare flitted across Quib's elfin features.
“No dragon chili?” he asked, clearly not understanding.
But it was impossible to keep Quib's spirits down for long. “Don't you worry, lassie,” he said, a big grin filling his face. “We'll have this critter stripped to the bone in no time. As the youngest, you can have the first bowl of dragon's blood pudding. And that's a promise!”
Lily blanched.
“Of course,” Quib went on, “the meat closest to the bone is the best.”
Lily shook her head, confusing Quib.
“Plenty . . . to . . . go around?” he said.
“Just beans, if you don't mind.”
“Well, suit yourself,” he said, and he turned to those around him and began barking orders.

And Quib isn't a man to give up easily, especially when there's such good grub to be had.

The afternoon passed quickly. Lunch was a small bowl of mildewed beans. Lily had a terrible time explaining to Quib what it meant to be a vegetarian. He kept saying things like, “Well, I could spare you a bit o' brains. They're not meat, right?” and “At least let me ladle on a good heapin' bit o' the grease, eh? No meat in that!” Twice, Lily had to grab his ladle and push it away from her bowl. “But how will you grow?” he asked.

As their adventure in the Moon Realm continues, Lily and Jasper will have to avoid things a lot worse than Quib's ladle o' grease if they want to remain vegetarians. Do you think the Rinn eat beans? Not likely! (Come to think of it, maybe that's for the best!)

Thanks for stopping by and sharing some food for thought, Richard! 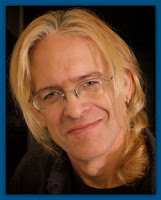 Richard Due (pronounced “Dewey”) first imagined the Moon Realm
while telling bedtime tales to his children. He makes his home in
Southern Maryland, where he and his wife owned and operated Second Looks Books, an independent used bookstore, for the past twenty years. The Moon Coin is the first novel in the Moon Realm series.
You can find Richard at:

Carolyn Arcabascio hails from Massachusetts, where she lives and works as an illustrator while pursuing her lifelong exploration of words, images, and the magical places where they meet.
You can visit Carolyn at:  CarolynArcabascio.com
Posted by Shelley Workinger at 9:31 PM