FOODFIC: The Hitchhiker's Guide to the Galaxy - Douglas Adams 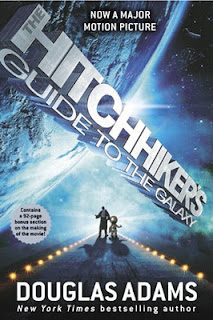 One stupid Thursday (his words, not mine) Arthur Dent wakes up hungover. Worse still, I’m denied knowledge of precisely what he over-drank the night before because he doesn’t really remember drinking at all. *sigh*

Luckily, it’s not long (just after an unnamed breakfast and a short stint lying in front of a bulldozer to stop it from flattening his house) before Arthur makes plans to go back to the pub with his friend Ford Prefect.  Of course, Arthur has no idea that Ford isn’t human (nor is the crew that’s there to build the galactic bypass) or that he only arrived on Earth (from Betelgeuse) 15 years ago. Ford clearly knows how to blend.
Ford’s also a master of mind games. He’s so good, in fact, that he convinces the demolition foreman to lie down in front of his own dozer so that Arthur can go to the pub. And, like any natural-born Englishman, Ford’s even better at drinking games. Check this out:

Between them would be placed a bottle of Janx Spirit…Each of the two contestants would then concentrate their will on the bottle and attempt to tip it and pour spirit into the glass of his opponent, who would then have to drink it. The bottle would then be refilled. The game would be played again. And again. Once you started to lose you would probably keep losing, because one of the effects of Janx Spirit is to depress telepsychic power. As soon as a predetermined quantity had been consumed, the final loser would have to perform a forfeit, which was usually obscenely biological. Ford Prefect usually played to lose.

Before we can even speculate as to whether or not Ford had experience with alcohol as we know it in his previous Betelgeusean life (which came first: the drinking or the game?), Chapter 2 jumps right to what the “Encyclopedia Galactica” has to say about alcohol (essentially: it’s volatile). Then there’s a much larger alcohol section in The Hitchhiker’s Guide to the Galaxy – the book within the book – which could be why it “sells rather better than” the encyclopedia. :)
We’re also told that HGTTG, interestingly enough, has a lot to say about towels, including their psychological value. Well, whaddya know? Seems we’ve established quite the pattern: drinking-mind-drinking-mind. That’s fun and all, but, at this point, I still don’t care much about Arthur, or even if he’s going to survive the demolition. It’s only because of the little ebook (oh, yeah; did I mention the HGTTG in the story is what can only be imagined as the grandfather of the iPod Touch?), that I need Arthur to hurry up and polish off his 3 pints of bitter, leave the bar – and the planet – and find a quiet spot to read that manual!

Okay, maybe that’s not exactly how the story plays out, but there are more excerpts from the little book whose cover shouts: “Don’t Panic!” There’s also more alcohol (including a galactic cocktail party!) and finally FOOD – perhaps enough to require a second blog post…:)
Posted by Shelley Workinger at 9:48 PM