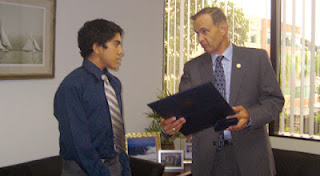 California teenager Bhaskar “Sam” Dutt was recently presented with the Congressional Award’s Bronze Medal, and yes, that is as impressive as it sounds; the medal is the United States Congress’ award for young Americans (aged 14 to 23) who combine their desire to help their communities with their eagerness to take on new challenges.

14-year-old Sam has logged close to 200 hours at Father Joe’s Village, Rady Children’s Hospital, Feeding America of San Diego, the YMCA, and Saikat (a non-profit organization that promotes Bangali culture in San Diego), as well as trail-building with his Boy Scout Troup. Not one to rest on his laurels, Sam has also earned his second-degree black belt, plays guitar in a local band, and is now close to achieving the next level of Congressional Awards – the Silver Medal – and plans to go for the Gold.

You, too, can achieve these honors; see how at:
http://congressionalaward.org/index.php

Do you know a toast-worthy teen you’d like to see featured here at BWATE?
Comment below with your email address so we can get a post together!
Posted by Shelley Workinger at 9:46 PM