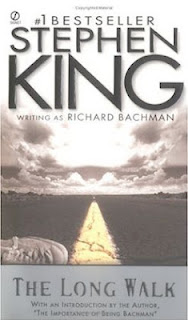 Walk or die – it’s that simple.

100 boys start walking in Northern Maine at 9am on the first day of May;* the one who walks the longest wins. There are a handful of rules, of course: stay on the road, maintain a minimum speed of 4 miles an hour, no interfering with the other participants, no breaks. The first 3 infractions get you warnings; the fourth buys you a ticket and you’re out (of both the race and life – “walk or die” isn’t a metaphorical slogan).

Now, even though the Walkers (yes, with a capital W, like Army or Red Sox) aren’t allowed to stop and stretch, sleep, or go to the bathroom (I’d say use your imagination, but you don’t have to; King has the boys show you how it’s done), they are given canteens of water and daily food rations. (And don’t go thinking the powers that be feed the Walkers out of concern for their health; it’s just that collapsing from hunger isn’t a sexy, crowd-pleasing way to fall out of the race.)

So if here’s where you think I’m going to talk about the rations as my FoodFic focus, you’re wrong. Yes, the “high-energy concentrate pastes” are worth nothing: bacon spread, beef concentrate, tuna paste…you get the idea. They say basic sustenance; I say boring sledge.

No, the food that speaks to me in this book is not the actual, but the allegorical. Parker explains to Garraty the folly in feeling any sense of accomplishment at having outlasted more than half of the other walkers:

It’s like shaking a box of crackers through a sieve…the crumbs fall through pretty fast. Then the little pieces break up and they go, too. But…the whole crackers have to break off a crumb at a time.

As in most life events, it’s not hard to beat the quitters; you only need to push a little to overtake the half-hearteds; the real challenge lies in outlasting the whole crackers. There are many such lessons on the Long Walk – all both timely and timeless – and only time will tell if people will learn them before they run out of warnings.

*The year isn’t important, as nothing in the book locks it into 1979 or 2012. I’d like to say the story is “timeless,” but I think that would imply a sort of romanticism that doesn’t reflect the tone of the book.
Posted by Shelley Workinger at 8:28 PM