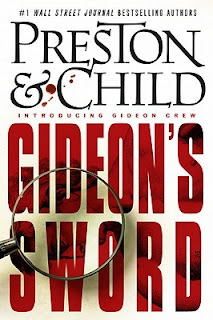 There’s nothing I love more than a supporting role that steals the show, whether it’s in movies, on TV, or in books…heck, my favorite part of Taylor Swift’s last L.A. concert was when Ellen DeGeneres popped by.

But back to Gideon Crew. Or, rather, his friend Tom O’Brien, whom Gideon calls a gentleman of singular and diverse endowments. These skills include (but surely aren’t limited to) deciphering numeric codes, recovering deleted data from cell phones, and reading and writing Mandarin.
Of course, Gideon himself is doing all of the dangerous work on this assignment: retrieving plans for a secret weapon that were smuggled into the U.S. from Hong Kong by a man Gideon saw run down and killed as soon as he left the airport. Oh, and he also has to outwit an assassin who’s on the same mission.

Besides having James Bond-esque intelligence, strength, and bravado, Gideon also has a mysterious past as an art thief, and is cute enough that a hooker he hires for cover wants to stay with him and forget about the money…and Gideon has a very Pretty Woman-ish soft spot for her. Brains, looks, charm – he’s got it all.

But that Tom O’Brien…well, he’s cantankerous when woken before noon, the clothes he scrounges up from his floor include a t-shirt featuring a death metal band called Cannibal Corpse, and he’s got a cat and a studio apartment where the Pullman kitchen is buried beneath moldy dishes. Yet, somehow – maybe it’s the Irish surname – I can ignore all of that and just picture him as a young Colin Farrell. (Did I mention that I mentally cast this story for film as I read it?)

What really seals the deal for me is when O’Brien makes himself a sandwich of peanut butter, sliced bananas, and mini-marshmallows. Okay, he almost lost me with that last almost-too-sweet ingredient, but he held on by topping his creation with sliced deli pickle. I don’t know about you, but that salty-sweet-sweet-salty combination sounds terrific to me.

Gideon, on the other hand, eats things that hold no appeal for my palate: raw oysters, poached eggs, toast with marmalade. Yuck.
So it’s crystal clear who’s the edgier, sexier man in the story…until O’Brien drops his culinary masterpiece on the floor, then reassembles it, picking cat hairs off the pickles.

Sorry, I don’t think even Colin Farrell could get away with that. ;)
Posted by Shelley Workinger at 2:57 PM