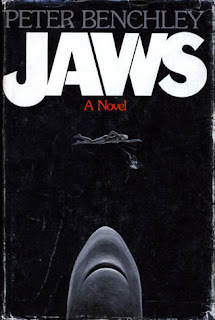 Yes, I had to read Jaws because I’m one of the gazillion people whose lives were ruined by the movie. My Grandma had cable when my parents didn’t, so her inability to say no combined with her complete disinterest in what was on the screen allowed for my much-too-young viewing of the horror classic with my cousin…and created an irrational fear that for years prevented me from being able to pee during the night because I was scared sharks could be circling in the “sea” between my bed and the bathroom. Perhaps a bit TMI? Oh, well; it was traumatic and over-sharing is part of my self-prescribed therapy, along with my annual round-the-clock viewing of Shark Week on Discovery (starting Sunday, August 12th - don't forget to set your DVR). Twisted, yes; resistable, no. Hey, even Mr. Benchley himself regretted the damage his book caused and spent the rest of his life working with conservationists in defense of sharks, but Jaws is an un-unringable bell if ever I heard one.

But let’s get back to the novel, which actually didn’t give the shark (or “fish” as he’s referred to in the text) all that much page time. Now, my edition said right on the cover that many storylines were dropped or glossed over for the movie, but I was still surprised by all of the character plots (and reading them made me realize that I couldn’t really remember the movie, so then I had to go watch that again, too, to see what made the final cut!).

Also interesting were the tons of food mentions (beyond what the shark was eating, which you already know). At one point in the story there’s a dinner party and one of the guests for some reason thinks it’s okay to tell the hostess’s cop husband how much she likes G & G s – grass and gazpacho. I’m not a big fan of gazpacho (although I haven’t had it in a long time, so maybe I should give it another shot?), but, regardless, I don’t see how sprinkling pot on it would do anything for you. So I had to look it up, but then the only reference I found was to this book, so…? Which, I have to admit, is kind of my reaction to everything 70s-related: Um, what? Frankly, it’s an era that I just don’t get.

Anyway, my point is (like Ellen, I do have one) that I started off reading one little book, which turned into my having to watch a movie, and then do internet research – in other words, a lot of appetite-building work! And, believe me, when I was done, I didn’t need that wait-20-minutes-after-you-eat rule to stay out of the water. ;)
Posted by Shelley Workinger at 11:19 PM