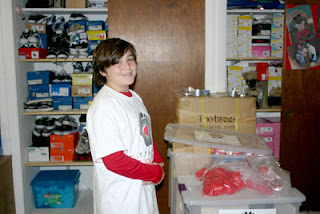 Even as a child (or perhaps because he was a child) Nicholas Lowinger recognized how seemingly small things can have huge importance. When the 5-year-old Nicholas noticed that the children at the homeless shelter where his mother volunteered had poor shoes (or none at all), he began donating his own shoes as he outgrew them.

And Nicholas’s desire to help grew as rapidly as he did, eventually giving birth to Gotta Have Sole – the non-profit organization he founded in 2010 to get new, properly-sized shoes to children in homeless shelters. So far, Nicholas has helped 3,000 kids in 8 states and continues to expand his reach.

What inspires him? In his own words:

New shoes not only provide the perfect fit for a child, but they also aid in increasing a child’s self-esteem. The exuberant expression on the children’s faces while receiving this shoes has been greatly satisfying to me. Parents and shelter advocates continue to comment on how happy the children are when they receive the new footwear. The parents have said that, without my program, they would never have been able to provide their children with such well-made footwear and how this has made such a positive difference in their children’s lives.

To find out more, visit:
http://www.gottahavesole.org

Do you know a toast-worthy teen you’d like to see featured here at BWATE?
Comment below with your email address so we can get a post together!

Posted by Shelley Workinger at 10:12 AM