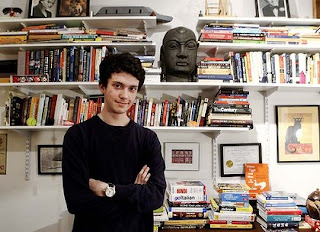 Some kids dread the required school language course; others who’ve grown up in multi-lingual homes see it as an easy A.

Timothy Doner is neither of those. It was actually studying for his bar mitzvah that got him started speaking Hebrew, which then perked his interest in Arabic, followed by Russian, Italian, Persian, Swahili, Indonesian, Hindi, Ojibwe, Pashto, Turkish, Hausa, Kurdish, Yiddish, Dutch, Croatian, and German.

Yes, you’re reading that right; the 16-year-old New Yorker has to date taught himself 20 languages, mainly through grammar books and iPhone apps, his goal being “not to speak like a native, but to learn the basics of as many languages as possible.”

Because of his special ability to pick up languages, Timothy has been able to both connect with a subculture of polyglots around the world via the internet, as well as engage in conversation with the foreign-speaking folks he encounters in daily life, like a NYC cab driver from West Africa with whom Timothy was able to chat with in Hausa.

Being able to talk to anyone, anywhere is a gift that truly does make the world Timothy’s oyster. ;)

Do you know a toast-worthy teen you’d like to see featured here at BWATE?
Comment below with your email address so we can get a post together!
Posted by Shelley Workinger at 12:28 PM